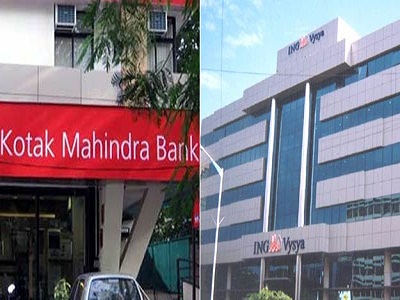 On Thursday, Kotak Mahindra Bank announced that it will acquire ING Vysya in $2.4 billion all-share deal. The transaction is believed to close in the latter half of the next year. Also, it is said that the takeover of ING Vysya by Kotak Mahindra is the first major deal within a time period of four years.

The acquisition of ING Vysya Bank by Kotak Mahindra Bank appears to be a win-win for the investors. The former is positioned appropriately in the market to enhance the overall operating efficiency of ING Vysya post acquisition. Apart from considering its better capital base, Kotak Mahindra will also be capable of generation a relatively higher business growth in those branches of ING Vysya that already exist.

Though both these banks have been lending to the same corporate segment, Kotak Mahindra has a higher operational efficiency than ING Vysya. To be more specific, the cost to income ratio of Kotak Mahindra Bank was 51 percent till September 2014, whereas the same for ING Vysya was 55.9 percent. Also, the net interest margin (NIM) of the former for 5 percent till the aforementioned time frame while that of ING Vysya was 3.5 percent.

Gradually, over a period of time, Kotak Mahindra is expected to enhance the ING Vysya margins and this will in turn unlock value for the investors.

Going by the prevailing stock price, the deal values of ING Vysya stand at 2.1 times its book value and this appears to be very much attractive for the investors of Kotak Mahindra. Back in 2010, when Bank of Rajasthan joined with ICICI Bank, the former was valued at more than three times its book value. With the fact that Kotak Mahindra has marginally higher branches as compared to ING Vysya, this deal is believed to provide a great opportunity for synergy.

After this deal, it is claimed that Kotak Mahindra would strengthen its position in the country as it will become the fourth largest private lender trailing behind ICICI Bank, HDFC Bank and Axis Bank. This will also increase the number of Kotak branches from 641 to 1,214.