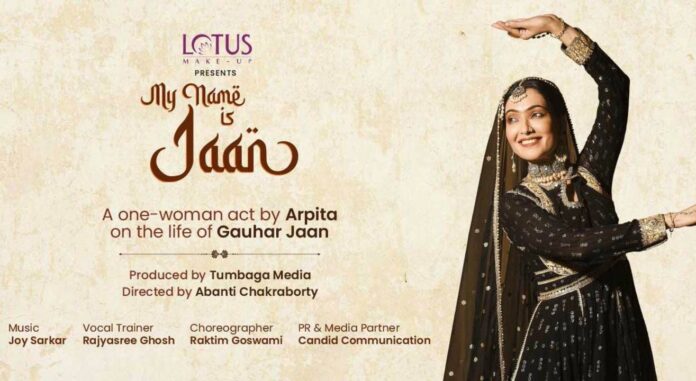 Lotus Makeup presents “My Name Is Jaan ” scores high reviews and compliments on its return back to the stage after September when the show was staged in the Red Carpet premiere.

The show was performed by Tollywood Actor, Arpita Chatterjee on the 18th of December 2021, staged at GD Birla Sabhaghar. It was a musical solo performance with a duration of two hours which comprises a combination of singing, dancing, acting, and narrating.

“My Name is Jaan” is a fabulous depiction of Gauhar Jaan, the first voice being recorded in India and considered one of the most enigmatic legends in Indian music history.

The play is a first-person narrative with a feminist undertone with a 95 minutes show, an interval in the middle. Taking the whole of the scenario along with us the audience can date back to history.

It was directed by Abanti Chakraborty who had excelled in creating magic through Arpita.

Arpita Chatterjee in this musical play sings 9 songs of various Gharana and languages live on the stage. Her melancholic voice and the extraordinary musical composition of Joy Sakar keep the audience thrilled in the heights of art.

Addressing the media Arpita stated, It is the dedication, hard work, and passion to captivate the audience while playing the divine composition of Gauhar Jaan made her performance also glorious.

During the practice, she never felt the delinquent energy from her in signing but that happened when she was performing on the stage and Arpita added that it was only the divine power of the music composed by Gauhar Jaan which enabled her to move her body, enact, narrate and sing at the same time.

She never felt the energy that she experienced when she was on the stage performing pure art.

She states her privilege of performing the best work in her career and she also puts forward her happiness to be back on the stage and address the audience. As a woman, she can relate completely to the masterpiece of Gauhar Jaan that giving up is never in the history of her and the play facing any adversity will be marked as a strength, and the rest will be named under fear.

She also makes a word about Kolkata city, the city which gave birth to many art forms and many creators of those arts still have that tranquility breathing in the air of the city.

Finally, the director of “My Name is Jaan”, Abanti Chakraborty mentioned that it was a dream come a true moment of his in his career when he worked with a masterpiece and he also added that without Arpita the crew will never have brought out in it the way it happened and that was the main success we achieved.

Keerthana R - September 27, 2022
0
Archies is celebrating Daughters Day by launching its unique and social #BondBeyondBlood campaign to recognize the change in the mindset of Indian...