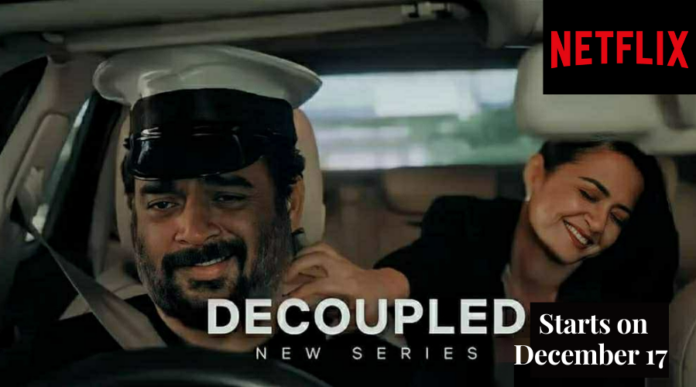 Netflix, the world’s leading entertainment platform, announced to launch Decoupled on December 17, 2021. The series is about fighting couples who are about to break up.

Decoupled, directed by Hardik Mehta, starred by R Madhavan and Surveen Chawla, is set in Gurgaon. Manu Joseph is the brain behind the story.

R Madhavan is a veteran Indian actor who primarily appears in Tamil and Hindi movies. He has to his credit many awards like three Tamil State Film Awards. Surveen Chawla is an Indian actress, known for her portrayals in series like Parched, Hate Story 2, etc.

The clash between the hilarious Arya and the calm and composed Shruti is the thread of the story. The web series elucidates the life of modern couples who strive with the subtleties of marriage life while taxing to maintain their sanctity.

Web originals have become the new trend these days. They are developing as the pulse of the young generation. The industry authorities and platform directors recognized this new trend among the younger actors.

Madhavan and his contemporaries from South India like Rana Daggubati, Vijay Sethupathi, actor Trisha have made appearances in web originals.

The actors have understood the enduring interest of online streaming media that developed tremendously. It can survive in the digitally transforming world.

Netflix has 24 million paid membership holders from over 190 countries. Its audience can play, pause and resume watching without being disturbed by commercials or other commitments.

The Reed Hastings-owned streaming service found that their platform is booming in size, almost three times, compared to 2020.

The Reed Hastings-owned streaming service has completed five years of its service. It generates programs across languages and genres. It has recently announced 40 plus originals which will soon appear in March.

A report by Media Partners Asia (MPA) on the growth of online streaming services is surprising. The study exposes that by the end of 2021, the subscriber base of Netflix will be 5.5 million.

Other online video platforms like Amazon Prime Video and Disney + Hotstar would reach a total subscriber base of 21.8 million and 46 million, respectively.

Author - January 20, 2022
0
SMEs have helped China to become the world factory, and India is trying to develop their MSMEs similarly to repeat the Chinese...