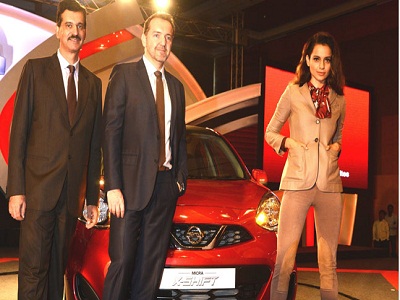 On Tuesday, the Japan based car manufacturer Nissan announced a limited edition model of the Micra. This is the first locally rolled out domestic vehicle in the automatic category priced at Rs 6.67 lakh as per the ex-showroom rating in Mumbai.

The manufacturer will roll out 750 units of this new variant called Micro X-shift with additional feature and style such as automatic transmission to commemorate the fifth anniversary of the locally made Micra.

Nissan has only 2 percent of the automobile market share in India, and it is focusing to ship Micra that is made at its Chennai manufacturing facility and almost 90,000 vehicles have been exported to Europe, Australia, Africa and America.

There are limited models and 160 outlets of Nissan in the country. With these, the manufacturer plans to take the market share from 2 percent to 5 percent in the coming years.

While unveiling the Micra X-shift, Guillaume Sicard, the President of Nissan India stated that the demand for the automatic cars have increased to more than 3.5 percent in the last couple years from the meager 1 percent in the fiscal year 2011-12.

The Japanese manufacturer Nissan rolled out the original Micra in July 2010 from the Chennai manufacturing plant. The model is now available in over 80 markets and it has managed to sell over 6 million units till date.

The new Micra X-shift is a limited model with only 750 units. It will feature the Xtronic CVT Technology and XL grade in the CVT range. The model is equipped with the efficient Xtronic CVT automatic gearbox that makes the vehicle the first one in this class to feature one. The Xtronic CVT Technology in the Micra limited edition delivers a fuel efficiency of 19.34 kmpl as certified by ARAI. Obviously, this is better than the one rendered by other automatic hatchback models in the same class.

Passionate In Marketing - October 21, 2020
0
The all-digital Boorito campaign by Chipotle is an indication of how much the pandemic has affected the marketing activities of the fast-casual...