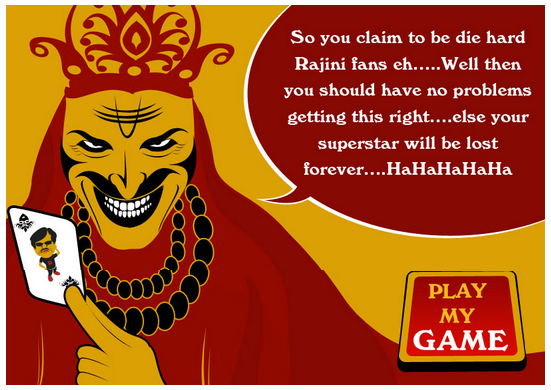 Dec 12, 2012: In the first of its kind in the publishing industry, Penguin India which is to launch the Biography of Rajnikanth on his 62 birthday on 12.12.12, ‘Rajnikanth: The Definitive Biography’ has launched a quirky campaign on the Social Media.

A game called ‘Find Rajini’ has been launched on Facebook on the premise that Rajnikanth is kidnapped by an evil Joker Raavan and only the fans of the superstar can save him. The campaign on Facebook is supported by a campaign on Twitter where Rajnikanth jokes are being tweeted. The campaign has become a huge success in a week of its launch by reaching more than 5 lakh people.

The campaign is definitely going to shatter records in the coming days with the mammoth fan base that the superstar has. Penguin India is backing up the social media campaign with visual merchandising across stores, on ground promotions and tie ups with retailers so as to give maximum hype to the launch.