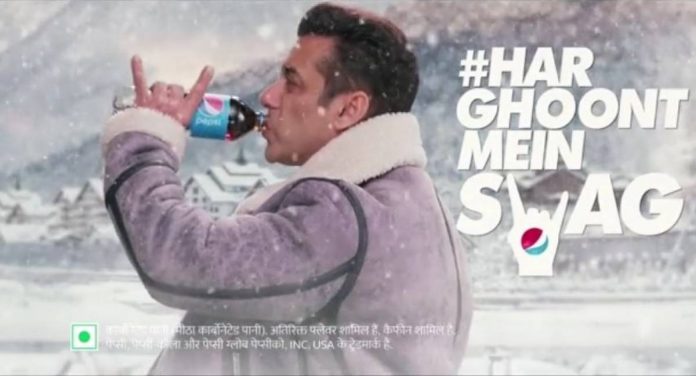 Bollywood star Salman Khan is featured in the new Pepsi ad with a snowfall setting in the background countering the seasonality of the segment.

All the soft drink brands in India are trying to position themselves as all-season players. ‘Thand lag rahi hai? Toh ek thandi Pepsi ho jaaye.’? These lines are pronounced by Bhai in the ad in the latest commercial of Pepsi.

Salman Bhai is seen in a thick furred jacket standing against a heavy snowfall backdrop takes a swag styled sip of chilled Pepsi. This positions the Indian fizzy beverage advertising on its spot. Usually ‘Bhai’ is seen wearing a sleeveless or a tee and flaunts his guns in previous Pepsi ads.

It’s probably the first time Pepsi India has released an ad with a winter setting. Yes, such strategic winter ads are generally released in the west during the Christmas and New year celebrations. But in the case of India Christmas celebrations are on low key preceded by Diwali and Dussehra festive seasons.

PepsiCo India spokesperson says “Whether at – home or outside, Pepsi is a treat that can be enjoyed in any season”. He also stated that the year end festive season is when friends and family members get together and enjoy the moments of happiness.

It is inevitable to say that the soft drink industry had a tough summer during 2020 due to pandemic. Brands are now targeting to recover rather than pursuing growth.

The spokesperson opined “ We understand how important the moments of togetherness and happiness in consumers journey of life and we are committed to being part of their journey through tout the year irrespective of seasonality. Hence we wanted to communicate with our consumers and not limiting ourselves to just summers thereby countering seasonality”.