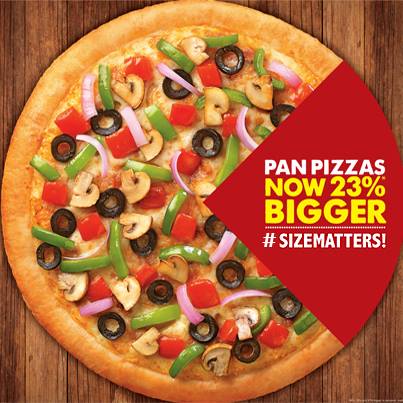 August 24, 2013: Pizza Hut launched its latest brand campaign for its Pan Pizzas ‘Pizza Bada Bill Chota’ on 15th August 2013. The new campaign which has been done by the new creative agency of Pizza Hut, Ogilvy & Mather is a sort of reinforcement ad which conveys constant innovation from the part of Pizza Hut. The ad also conveys about Pizza Hut offering its customers variety, quality and more value for money. degree campaign for the Bigger Pan Pizza. The new commercial which was released on Independence Day shows two friends enjoying their Pizza in Pizza Hut. When they order to their surprise a Bigger Pan Pizza is served whereas they had ordered for a medium Pizza. Just when they are mulling over the bill for the Pizza, the TVC ends with a voice over, which says ‘Pizza Bada Bill Chota’.

Sandeep Kataria, Brand General Manager & CMO-Pizza Hut India speaking about the new campaign was quoted as saying “Pizza Hut strives to give diners a great experience over delicious food. In the times of rising prices and inflation we are leaving no stone unturned to cushion the effect of that on our consumers by offering the best pizza at the best value ‘Size matters’! We now have  Ogilvy & Mather on board and with their partnership we have brought alive the Bigger Pan Pizza size message in a humorous slice of life way in the TV ad which consumers will enjoy and relate to.”

The new TVC highlights that now the Pan Pizza is 23 per cent bigger than what it was earlier and that too without an increase in prize. The advertisement communicates about a new dining experience and calls for more reasons to hang out with friends and family.

Author - January 14, 2022
0
As we all know, our nation is witnessing the spike of the third wave of Covid, the omicron surge, the government is...