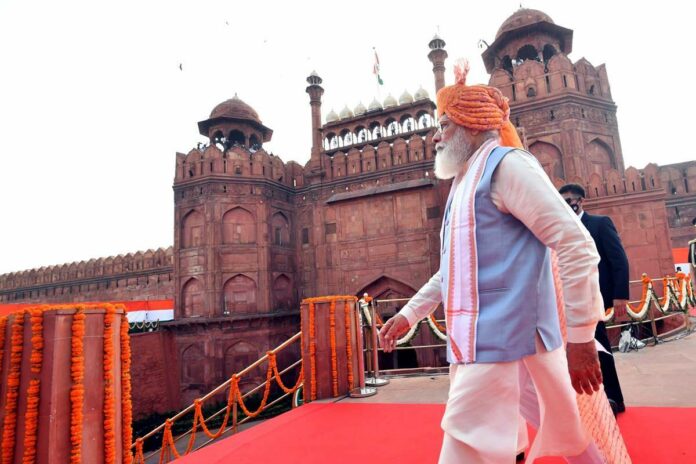 According to the Prime Minister, India purchased around USD 8 billion in mobile phones seven years ago and now exports USD 3 billion in mobile phones. Along with modern infrastructure, India has to take a comprehensive approach to infrastructure development, Prime Minister Narendra Modi said after raising the tricolor in his Independence Day address.

Modi said that the government is working to make small farmers, who own less than two hectares of land and account for more than 80% of all farmers. The prime minister declared that all rice given under any plan will be fortified by 2024. “Our villages are seeing the fast transformation,” Modi remarked, emphasizing that digital entrepreneurs are also being developed in rural areas.

The progress of Jammu and Kashmir is apparent on the ground, according to Modi, who also stated that the delimitation effort is ongoing and that preparations for assembly elections are underway. Reservation is being provided for Dalits, STs, backward, and general category poor, he said in his address, emphasizing the need of assisting underprivileged people. Within two years of the ‘Jal Jeevan Mission,’ he added, almost 4.5 crore additional homes have access to piped water.

For the construction of a new India, Prime Minister Narendra Modi has called for ‘Sabka Prayas’ as well as ‘Sabka Saath, Sabka Vikas, Sabka Vishwas.’ Modi stated that India must continue to make fresh commitments for the next 25 years. Modi emphasized that the day should be more than just a ritual. People should be proud that the country is hosting the world’s largest Covid immunization programme, he added.

He praised physicians, nurses, vaccine manufacturers, and everyone participating in the fight against COVID-19. The sorrow of division was one of the biggest tragedies of the twentieth century, according to the prime minister, who declared August 14 as Partition Horrors Remembrance Day. He also praised India’s Olympic delegation, which was in attendance at the Red Fort, and said their performance inspired the country’s youth.