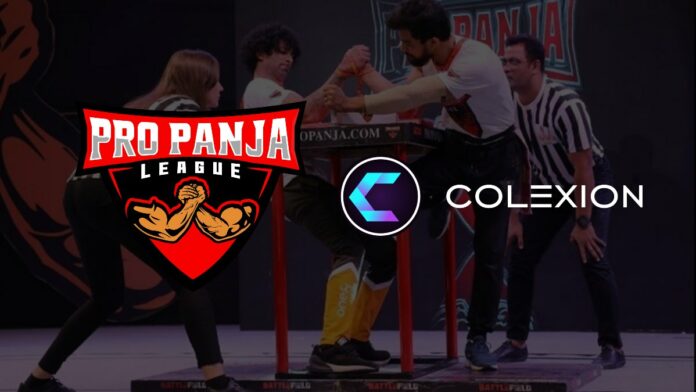 The league will provide Colexion the license to produce NFTs of memorable moments from previous and future bouts of the league.

It will also provide the fans a chance to take possession of their favorite arm-wrestling moments in a verifiable manner.

Pro Panja League is the biggest arm-wrestling tournament in Asia and the first of its type in India.

The league which is a popular grassroots sport in India has had a phenomenal response in terms of participation and spectators from all over the nation.

Preeti Jhangiani, Founder-Director of Pro Panja League spoke on the collaboration that the league is all about revolutionizing a modest, grassroots sport of India.

And states that it provides the rightful platform to stand at par with other sports leagues in the nation.

They also expressed that they are ecstatic to collaborate with Colexion on the first-ever arm-wrestling NFTs in India.

By this, they are creating an opportunity for the fans to own a piece of their favorite sports, panja will be able to provide new and inventive methods for fans to interact with the brand.

“We are creating a robust platform that showcases the digital legacies of some of the greatest artists, personalities, and talent across the world”, said Abhay Aggarwal, Founder, and CEO of Colexion.

He added that they are thrilled to partner up with Pro Panja League.

They aim to empower digital artists and provide them the opportunity to have unique and intimate experiences with their favorite athletes.

Bibin Babu, Co-Founder and COO of Colexion stated, “In the NFT space, Colexion is a pioneer and continues to advance their creator-focused mission.”

Colexion is gaining traction with each passing day and is delighted to be partnering with India’s fastest-growing arm-wrestling league.

The Pro Panja League’s growth has been spectacular, and the collaboration will enable it to enter the blockchain world, unlock the new NFT values and become a part of the metaverse, he further added.

An NFT is a type of blockchain-based digital asset with a recorded, verified ownership status, such as photos, videos, and text.