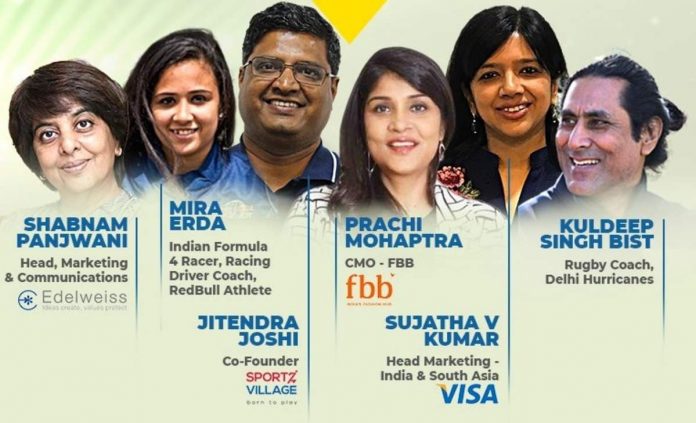 The panel discussion on the ‘Untapped Potential of Women’s Sports Marketing‘ was moderated by Jitendra Joshi, co-founder of Sportz Village and touched on the philosophy, hurdles, achievements and future opportunities for the growth of female sports marketing in India.

The panel consisted of a number of prominent marketers, sportsmen and coaches, including Shabnam Panjwani, Head of Marketing and Communications at Edelweiss Financial Services; Mira Erda, Formula 4 Racer and Coach; Kuldeep Singh Bist, Sujatha Kumar, Head of Marketing for India and Souj, etc.

Edelweiss Financial Services‘ Panjwani confirmed that the involvement of various brands in women’s sports did not start as a marketing campaign but with the EdelGive foundation that collaborated with Olympic Gold Quest, a nonprofit organization that supports the training of top Indian athletes. “We started out when we didn’t even know names like Mary Kom, PV Sindhu … We realised that there was a huge attempt to fully build recognition during the London Olympics. It was very surprising, so when we went around asking various people over the ages if they knew these names and images, it came up empty, “Panjwani said.

The youngest on the panel, Erda, is doing her most for using her influence to spread knowledge about India’s motorsports. She admitted, “I was able to build the right image for motorsports in India by having major brands like JK Tyres, Redbull, and GoPro supporting me.” She acknowledges that motorsport is an unusual sport in general, but it’s even rarer as it’s quite costly. Brands are also hesitant to engage racers because they don’t know how racers can support brands.

In 2004, Coach Kuldeep Singh Bist founded the Delhi Hurricanes, that has given the national rugby team around 50 players and 17 girls have played the Indian national team so far. In 2009 the women’s rugby team was established and around 40% of the Delhi Hurricane participants are girls. Bist claims that there is a bright future ahead for girls’ rugby and brands must endorse the sport in promoting not only the sport but also their own brands.

Both Panjwani and Kumar have supported the idea of funding sporting activities and players, and not only for the TRPs and what marketers could reap from the contract, but also for the ideals that these activities and sportspeople uphold.

Passionate In Marketing - September 17, 2020
0
The new beverage called Driftwell is being introduced by PepsiCo to help people relax before the bed. The enhanced drink contains 200 mg of...