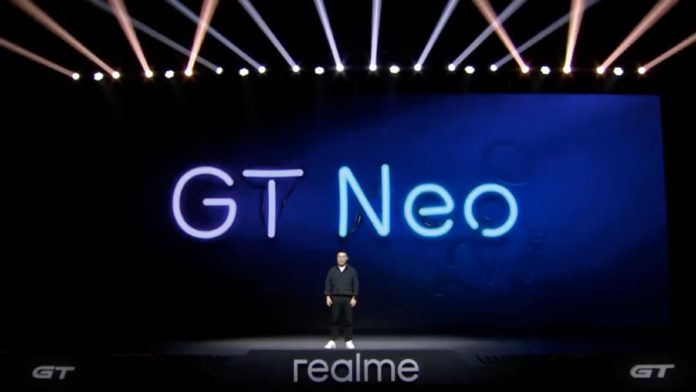 Realme GT 5G was just launched yesterday as the company’s first flagship of 2021. Furthermore, there will be another. Realme also teased that its second lead smartphone will be called Realme GT Neo at the end of the launch event for GT 5G.

The reason behind why there will be two flagships in a year is a new strategy that Realme announced a few days back. It said it will launch two flagships a year differentiated by their platforms. This essentially implies that while one flagship will use the Qualcomm Snapdragon 800-series processor (Snapdragon 888 in GT 5G), the other one will be controlled by a MediaTek Dimensity chipset. The Realme GT Neo will be the latter one.

At the launch event’s conclusion, Realme confirmed the GT Neo will come running the recently launched MediaTek Dimensity 1200 processor. This chipset was announced in January and is fabbed using 6-nanometre architecture. The chipset uses one Cortex-A78 main core clocked at 3.0GHz, three Cortex-A78 cores working at 2.6GHz, and four Cortex-A55 cores that run at 2GHz. It is coupled with a Mali-G77 MC9 GPU. MediaTek said that the Dimensity 1200 is its most developed mobile chipset up until now, but that doesn’t mean it measures up with the Qualcomm Snapdragon 888 processor. It will belong to the budget premium category for phones with 5G.

MediaTek had recently said a Realme phone with Dimensity 1200 processor might be launched either by the end of March or towards the start of April. This means the launch of Realme GT Neo isn’t far. In fact, if the said timelines are Realme is intending to follow, there may be a little gap between the two flagships and that might confuse buyers. Although Realme said the Qualcomm Snapdragon-powered flagship will be a performance-centric phone and the one with Dimensity chipset will focus on cameras, I am not sure how buyers will be able to differentiate between the two. Realme GT 5G has a 64MP triple-camera setup while the GT Neo camera information isn’t known as of now.

Realme is appearing the 108MP Samsung ISOCELL HM2 sensor with the upcoming Realme 8 Pro. Presently, the most extreme graphic resolution available on an Android phone camera is using the 108MP sensor – which is the reason Realme is highly expected to use the 108MP camera on the upcoming GT Neo. But, here is the thing. Since there is going to be a 108MP on both phones – which will have a stark difference in their prices – Realme would go for a better sensor here. The best 108MP sensor is the Samsung ISOCELL HM3 that is used on the Galaxy S21 flagship series. The HM2 sensor belongs to last year. This would not just make the Realme GT 5G to justify the price but it would also allow Realme to keep measurable differences between its various phones.