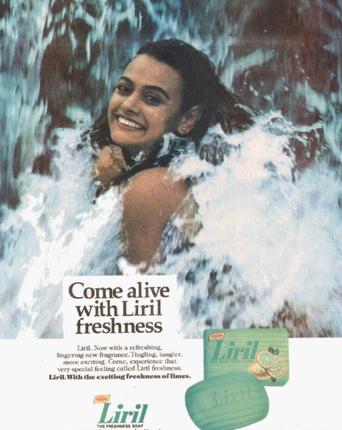 It would be nostalgic for more of us to see a bikini-clad girl dancing under a waterfall amidst a lush, quiet green valley to a catchy tune. Hindustan Unilever has made an approach to travel down this memory lane choosing one of the hottest ever Indian ads in order to relaunch the Liril soap brand. This ad went off air for over a decade, but it is not forgotten. Now, the Liril girl is back with a bang.

Regarding the same, George Koshy, the General Manager of Personal Wash Category at Hindustan Unilever Limited (HUL) claimed that these are the roots of Liril. They do not change. The company is paying homage to Liril by bringing the very same elements that were a part of the culture through time alive.

Alpana Parida, the President at DY Works, a brand consultancy firm claimed that it is an iconic ad in the memory of Indian advertisements. Even the newer people are quite interested in history if there is a back story as interesting as in the case of Liril. The green soap will definitely emerge among the rest in the low-involvement category like soaps and it will manage to gain the market share slowly.

After 1985, the brand was defined by models including Preity Zinta, Pooja Batra and Deepika Padukone, wherein each one were seen playing in the water and swimming under the waterfall. But, they were imitating the shadow of the originally shot ad featuring Karen Lunel.

Also, the soap was not the same after the early 90s as the lemon product was diluted with variants such as icy blue and orange and it was followed by a change in the name to Liril 2000 in the last decade.

Though the image of the lime and lemony soap brand and its ad have not faded away from the minds of the consumers, its market share did plunge down from 14 percent three decades back to less than 2 percent now.

It remains to be seen if this strategy of Hindustan Unilever of relaunch of Liril soap brand with the old ad concept creates a nostalgic feeling among the users and spiral up sales for the company.