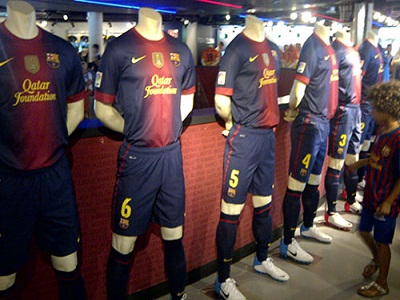 Suditi Industries Ltd. which got listed in BSE has grabbed the official apparel licensing right of the legendary football clubs Real Madrid, Manchester City and FC Barcelona representing it in India. The company would be bringing the sports apparel brands in India

This partnership took place under the director of Viacom18 for FC Barcelona and Bradford License India for Manchester City FC. By bagging this deal, Suditi Industries Ltd. acquired the rights to manufacture and market the fashion apparel that will be favored by the football fans and casual wear lovers all over the country. This way, it will encourage the vendor to celebrate their passion for the game of football.

Suditi Industries Ltd. that is a part of this deal will design and manufacture the licensed clothing range that will comprise of t-shirts, jackets, polo’s, sweatshirts, boxers and track pants for me.

For FC Barcelona, an elite range will be manufactured with digitalized signatures of the players such as Andres Iniesta, Neymar, Lionel Messi and Luis Suarez. The same will be presented and a special FCB kids’ lineup will also be made.

Regarding the same, Pawan Agarwal, the Chairman and Managing Director of Suditi Industries Ltd. claimed that it is pleasing to have bagged the apparel licensing rights for the renowned global clubs such as FC Barcelona, Real Madrid C.F. and Manchester City FC. The partnership with these clubs will provide a great opportunity for the company and it will also strengthen their commercial connections and position in the sport merchandise segment of the market. He further stated that they are optimistic that the collection presented will lure the club supporters to a great extent like never before.

As per the Retail Head at Suditi Industries Ltd, Animesh Maheshwari, the company is glad to be honored to work on collaboration with the leading football clubs. The manufacturer is aiming to establish a strong relationship with the football clubs and their fans in India.

The football merchandise and apparels will be made available via the major departmental stores, MBOs, large format stores and Riot stores apart from being listed by the e-commerce portals.

Passionate In Marketing - July 2, 2020
0
If something in ZEE Biskope's "alma" is etched, it is the 24-hour pledge of the Bhojpuri film channel to offer its viewers...