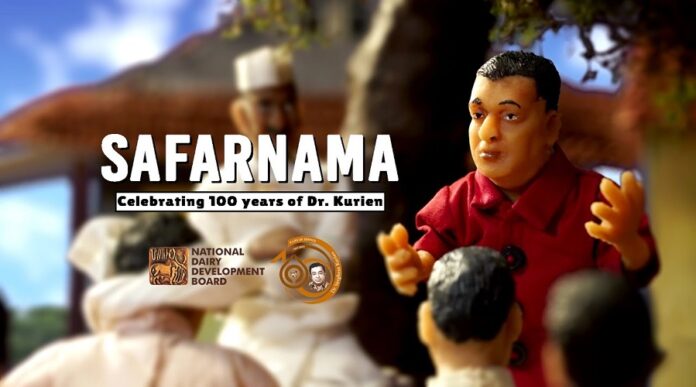 “India’s place in the sun would come from the partnership between the wisdom of its rural people and skill of its professionals,” says Dr.Verghese Kurien, the architect of the White Revolution.

Celebrating the 100th birthday of this true visionary, the National Dairy Development Board (NDDB) created an ad film titled ‘Safarnama – Journey of Father of White Revolution’ to pay homage to his massive contributions and hard work.

A true legend of India, Dr.Verghese Kurien was instrumental in developing India into one of the largest milk-producing countries in the world.

An awardee of Padma Vibhushan, Dr. Kurien transformed India from a milk-consuming country to a milk-producing country.

The ad film Safarnama, with a duration of five minutes, portrays a brief history of Dr. Kurien. The film depicts the various institutes and corporates established by Dr. Kurien like AMUL, Mother Dairy, Institute of Rural Management Anand (IRMA), and Anandalaya School.

Safarnama is known as the Book of Travels. The Urdu word is derived from Safar, which means journey & ‘-naama’ means ‘the story of.’

Safarnama, created by Dream Vox Studios, is a media company based in Vadodara. The film uses stop-motion animation, a popular animation filmmaking technique.

This stop-motion ad film is the collective achievement of the media company. Karan Bhatt, the partner at Dream Vox Studios, shared the scenes behind the film.

The team chose the three-dimensional animation technique over two-dimensional as the subject matter was authentic.

One can trace the hard work and dedication needed for creating such an ad film with great perfection and authenticity.

The team of Dream Vox Studios had conducted a lot of research about the life, journeys, and developments of Dr. Kurien. They also referred to many books on his life to gather more inputs.

The team captured images of the institutes and dairy plants of Dr. Kurien to use as a reference to build the set.

They also watched the film Manthan to get more information. It is a Hindi film directed by Shyam Benegal, motivated by the life of Dr.Verghese Kurien.

It was a challenge to narrow down the fruitful journey of such a big personality in just 5 minutes. Making these five minutes engaging, informative, and saluting Dr. Kurien is even more challenging.

The creation of miniature characters is another challenge. Wires covered with cotton & bandages are used to make the characters. They are again covered with silicon to mold them easily. Each character was 8-9 inches in size.

Thus, the stop-motion ad film Safarnama was a long journey from scripting film to the final film.

Even though Dr. Kurien passed from us a decade ago, his vision and spirit still bloom in India. The ad film Safarnama was able to rekindle the fire in its spectators about the dream of Dr. Kurien in making a self-sustainable India.

Author - December 7, 2021
0
The grand old Japanese conglomerate is in rocky waters lately. Since the accounting malpractices of the company surfaced in 2015, and the...