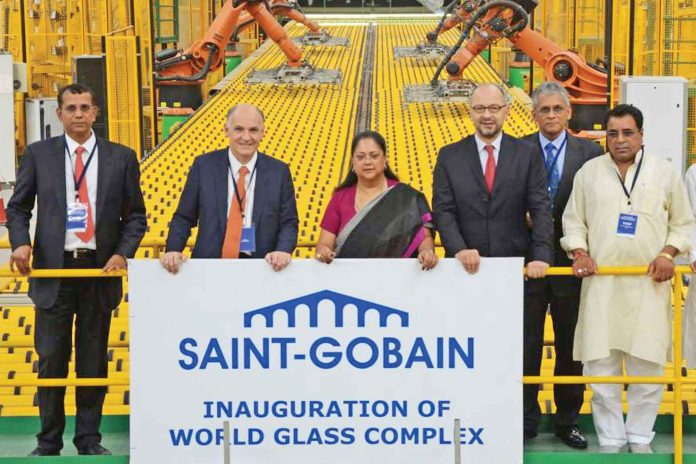 Compagnie de Saint-Gobain S.A popularly known as Saint-Gobain is a multinational giant corporation founded in the year 1665 in Paris. The MNC was started with mirror production and later occupied into the building materials industry by the production of ceramics, plastics, gypsum plasterboards, glass as such. The company operates worldwide with around 180,000 and has recorded revenue of €41.8 billion in the year 2018. Some of the brands of Saint-Gobain are Saint-Gobain Performance Plastics, British Gypsum, Glassolutions, Gyproc, Saint-Gobain Glass, etc.  The subsidiary of Saint Gobain in India is called Saint-Gobain India Private Limited which produces various types of glasses in India such as fire-resistant glass, solar control glass, etc. The manufacturing unit of the company in India is located in Sriperumbudur, Chennai.

Saint-Gobain has committed an investment of Rs 1,100 in Rajasthan as part of its expansion in India. The investment aimed at adding up to 300 job opportunities in the Bhiwadi and Alwar parts of Rajasthan thus transforming the state into a destination for float glass to meet the company’s Asian demand. Earlier, the company has invested more than Rs 1,200 crore in the year 2010 in Rajasthan, resulted in the creation of around 1,100 jobs.

According to B Santhanam (Chairman, Saint-Gobain Group), the company will set up a world-class float glass plant in Bhiwadi as part of its expansion strategy. Rajasthan is best for the company to invest because of the availability of raw materials, efficient laborers, and a supportive government. The new investment enables the company to manufacture advanced and best products for the building and automobile sectors in India.

The state has also witnessed investments of Rs 1, 50,000 crores during the past years in various sectors such as IT, Startups, renewable energy, electronics, glass manufacturing, medical and health, ceramics, earthmoving, apparel, mines, and minerals, etc. Rajasthan government has declared policies such as Rajasthan Industrial Development Policy-2019, Rajasthan Agro Processing-Agri Business, Rajasthan Investment Promotion Scheme (RIPS)-2019, and Agri Export Promotion Policy-2019 to attract investment in various sectors. Rajasthan is the 2nd most mineral producer in the state in terms of value. The only state which produces Zinc and Lead in the country is Rajasthan. The state has a large production of minerals such as Marble, Sandstone, and Limestone and is the largest reserve for felspar, potash, and granite.

Author - January 19, 2022
0
The most entertaining and well-known channel for kids, Sony YAY!. The majority of kids are fond of the beloved character Honey Bunny...