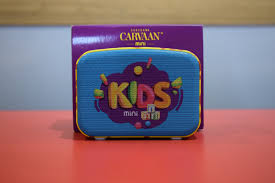 Saregama India Ltd. is India’s oldest music label owned by RP- Sanjiv Goenka Group of companies. Recently, Music label Saregama launched a special Chhota Bheem edition of Carvaan Mini Kids, a product for the kids segment that it had brought out in October 2020.

Offering solutions to daily problems like increased screen time, kids’ boredom and more, the latest offering is designed for kids aged between 2-10 years and comes pre-loaded with stories, rhymes, learning topics and mantras, it is priced at ₹2,990.

It also signed a licensing partnership with Swedish audio streaming service Spotify for India, which means the label’s entire catalogue is now available for users in the country. With music catalogues spanning eras and over 25 languages, Saregama’s list of more than 100,000 songs includes film, Carnatic, Hindustani classical and devotional music. Spotify users in India can tune in to Lata Mangeshkar, Mohammed Rafi and RD Burman tracks and choose from playlists such as This is Kishore Kumar, This is Asha Bhosle, Starring Amitabh Bachchan, Old is Gold and others. The label has also entered into a partnership with director Sanjay Leela Bhansali for three upcoming projects, including Alia Bhatt-starrer Gangubai Kathiawadi, his next untitled directorial and his first non-film Hindi originals album which will have music composed by him. Last year, Saregama had also struck a global licensing deal with Facebook under which the Indian music company’s entire catalogue will be available on the social media platform and its video sharing app Instagram.

Saregama that returned to active film music acquisition in 2016 after a six-year gap had said that it intends to balance physical devices along with digital media. The over 110-year-old music company had chosen to invest in the portable radio-cum-music player Carvaan that was launched in 2017 along with music cards that came out in March 2016. The Carvaan Mini Kids could be a perfect gift for your kids as it would not only keep them entertained but also educate them. The key advantage of the device, which has played a crucial role in the popularity of other Carvaan players, is the ease of operation.The content is preloaded on the device and is not refreshed or downloaded from the internet. Because of this, the device is easy to use. The Mini Kids will be available for purchase on Amazon, Flipkart, and saregama.com.