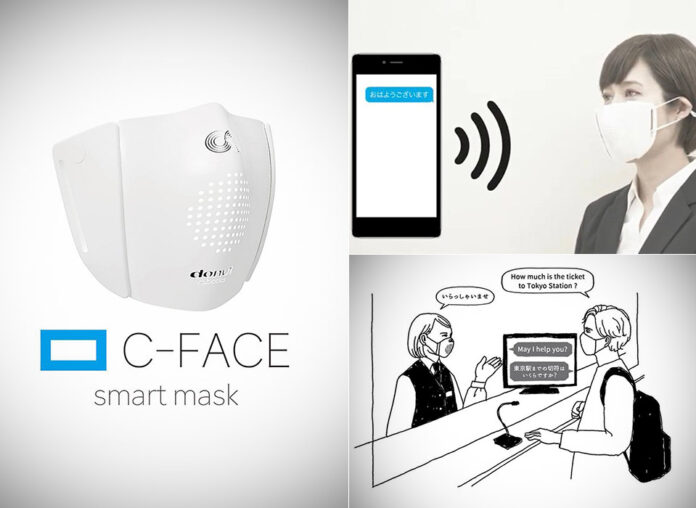 Across the globe, the use of masks has become a part of the attire in daily lives due to COVID-19. The Japanese start-up called Donut Robotics created a smart mask called C-Face Smart mask.  It is the world’s first mask that works with a smartphone designed using Robotics technology.

C-Face Smart mask is designed to help in communication as well in social distancing during this hard time. The mask has the ability to translate speech into eight different languages such as English, Chinese, French, Spanish, Korean, Vietnamese, and Indonesian. The smart mask has cutouts, in order to keep air circulation, therefore a standard face mask has to be used underneath is understood.

The company did not have any plans initially to develop a smart mask. But it adapted during this hard time.  The initial plan of the company was to use translation software for the company’s robot called cinnamon. But then, it was put on hold due to the current scenario and the company changed its focus to masks.

Cinnamon robot is one of the four translation robot prototypes that was selected in the year 2016. The robot was selected for its user-friendly design and impressive functionalities as well as the software ability to operate in loud environments.

The smart mask is constructed with plastic and silicone with Bluetooth technology with a microphone embedded in it. It helps to link to the users’ smartphone. The Bluetooth can connect up to 32 feet. Ono says that technology helps in social distancing, particularly in environments like hospitals and offices during the pandemic. He also added that there occur situations where we will be forced to meet in person, therefore, the smart masks help in this new normal life.

The product is planned to launch in December in Japan with a production of 5000 to 10,000 masks and in the other parts of the world in the second quarter of next year. The cost is expected to be between $40 and $50. A monthly fee for translation and transcription services will be charged by the company.