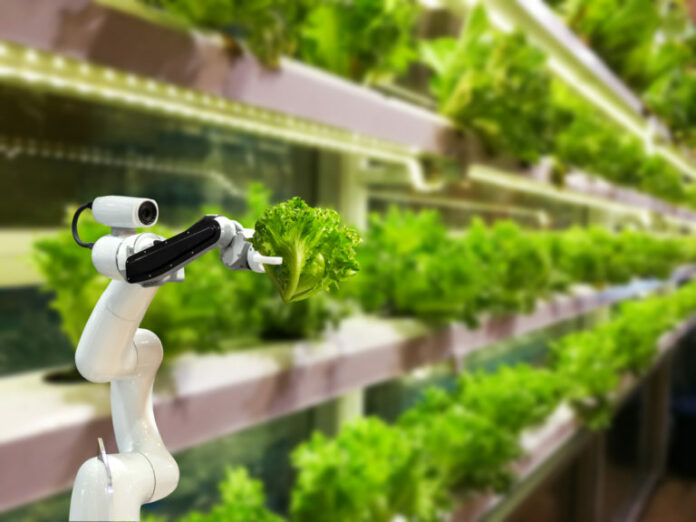 Agtech startup Plenty, based in San Francisco, is redefining agriculture through vertical farming. This start-up company is constantly improving the quality of product growth by using artificial intelligence and robotics while using 95 percent less water and 99 percent less ground. It achieves this through the technology of Controlled Environment Agriculture, which relies on AI to monitor temperature, humidity, and gas variables. By self-learning how to grow faster, larger, better crops, AI also continuously optimizes itself. To grab large hanging racks of growing vegetables, many use robots and move them where they are needed.

In the meantime, LED panels act as sunshine, which ensures that within the vertical farms, food is grown 24/7, and water lost by transpiration is recovered and reused to prevent any waste. To ensure optimal plant growth in the artificial world, artificial intelligence also helps control the combination of blue, red, and white light. Overall, Plenty’s flagship farm is so good that it generates 400 times more food than a flat farm per acre. There are other start-ups for vertical farming that use both artificial intelligence and automation principles. The Growtune technology platform from iFarm enables growers to harness innovations such as computer vision, machine learning, and enormous data volumes.

Though vertical agriculture is a solution to land constraints, water waste is faced today in agriculture, there are concerns that it is less energy efficient. This is partly due to the technology of LED lighting and climate control used at vertical farms. An article published in Independent notes that for every square meter of growing area, an estimated 250 kWh of energy per year would be needed if lettuces are grown in traditionally heated greenhouses in the United Kingdom. In contrast, for each square meter of growing area, lettuces grown in a purpose-built vertical farm need an estimated 3,500 kWh a year.

Artificial intelligence is now able to overcome this. Farmers can track and control the treatment of plants in vertical farms via AI-based IoT sensors and obtain information through AI models on how to dramatically improve the system in the future, in terms of development, quantity, and quality. Artificial intelligence helps in smart tracking of CO2 emissions by climate control tools, allows for flatter energy delivery during any given day, and fewer peaks and more. These allow startups such as Vertical Future and &ever to be 60 percent and 40 percent more energy efficient than their counterparts, respectively.