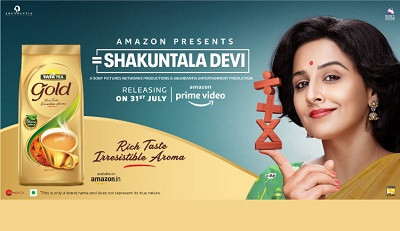 Tata Tea Gold, the premium offering from Tata Tea’s portfolio has announced its collaboration with Amazon in a multi-platform partnership comprising of Amazon’s OTT  platform, Amazon Prime Video and its e-commerce platform. The collaboration is for the promotion of the movie Shakuntala Devi (featuring Vidya Balan), releasing on Amazon Prime Video.

Tata Tea Gold will be the beverage partner of the movie, releasing on July 31st.

Through this partnership Tata Tea Gold aims to increase its brand recall while also driving its unique proposition ‘Dil Ki Suno’. The ‘Dil Ki Suno’ campaign completely aligns with the message behind the movie ‘Shakuntala Devi’; the real life story of a motivated woman and her fascinating and inspirational journey as she broke stereotypes surrounding women and followed her heart to pursue her passion for Mathematics.

The campaign will be initiated by Tata Tea Gold with co-branded creatives on Amazon.in followed by a 360-degree media campaign on TV, Social and Digital media.

In the current situation of a global pandemic which led to the closure of cinema theatres across the world, movies are now being released on major OTT platforms. This emerging trend has moved the interests of various brands towards such OTT platforms.

As per Puneet Das, VP Marketing, Beverages, Tata Consumer Products, the association is rewarding as there is a significant rise in the relevance of OTT platforms due to a rise in Online streaming consumption. Such platforms have emerged as the new substitutes for advertising by brands. Not only do the Online Streaming platforms help the content in reaching a mass audience, but they’re also more cost effective than a formal, traditional release.

The campaign will be a benefit for both the brands, providing Amazon the required buzz around the movie and Tata Tea Gold with the exposure to Amazon’s huge customer base including Amazon Prime Video subscribers and the users of Amazon’s E-Commerce platform.