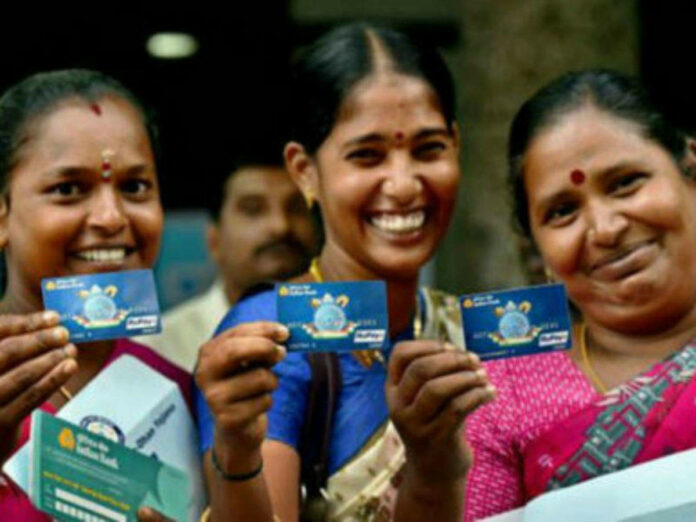 The finance ministry stated on Saturday that the number of accounts opened under the government’s flagship financial inclusion scheme, the Pradhan Mantri Jan Dhan Yojna (PMJDY), has reached 43 crores, marking the scheme’s seventh year of operation.

Prime Minister Narendra Modi announced PMJDY in his Independence Day speech on August 15, 2014, and it was launched on August 28 to promote financial inclusion. The goal of the national mission is to guarantee that individuals have inexpensive access to financial services like banking, remittance, credit, insurance, and pensions.

At the end of 2021, the total assets of PMJDY were 43.04 crores. According to the finance ministry, women account for 55.47 percent (23.87 crores) of Jan-Dhan account holders, with 66.69 percent (28.70 crores) of account holders living in rural and semi-urban areas. In the first year of operation, 17.90 crore PMJDY accounts were opened.

According to the announcement, 36.86 crores or 85.6 percent of the 43.04 crore PMJDY accounts are active, with an average deposit of Rs 3,398 per account. He praised all those who worked tirelessly to make PMJDY a success, saying that their actions have improved the quality of life for Indians. Finance Minister Nirmala Sitharaman emphasized the importance of the scheme, stating that the seven-year journey of PMJDY-led interventions has resulted in both transformational and directional change, enabling the emerging financial inclusion ecosystem to deliver financial services to the last person in society—the poorest of the poor.

She stated that “The underlying pillars of PMJDY, namely, Banking the Unbanked, Securing the Unsecured and Funding the Unfunded has made it possible to adopt multi-stakeholders collaborative approach while leveraging technology for serving the unserved and underserved areas as well,”

The finance ministry said that under the PM Garib Kalyan Yojana, which was announced on March 26, 2020, an amount of Rs 500 per month for three months (April to June 2020) has been credited to the accounts of PMJDY women account holders. During the Covid lockdown, Rs 30,945 crores were credited to PMJDY accounts for women as an income assistance measure.

The government, in cooperation with the DBT Mission, NPCI, banks, and other departments, analyses avoidable reasons for DBT failures to ensure that qualified beneficiaries receive their DBTs on time. The share of DBT failures owing to preventable factors reduced from 13.5 percent in FY 19-20 to 5.7 percent in FY 20-21 as a result of regular video conferencing with banks and NPCI.