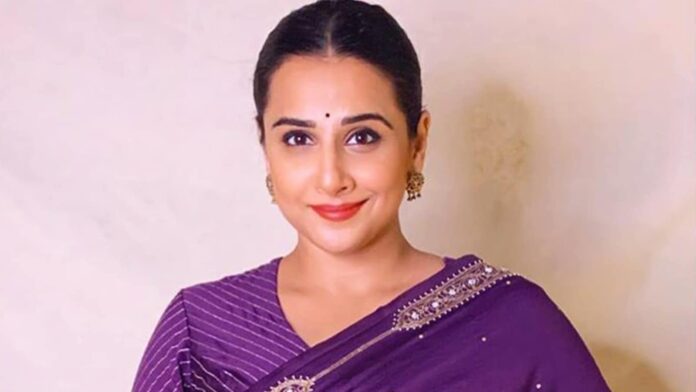 Vidya Balan, a remarkable Bollywood actor, says women in India, are being depicted in a real way in movies and she’s happy to be a part of the change.

Vidya understands her game well. When Bollywood is making movies that are motivating, empowering, and is ahead of its time, with actresses taking the middle stage, she takes pride in her contribution to this change.

In an interview, she said that it feels great when someone says that she has been the face of this change that movies are witnessing. She has been at the right place, at the right time with the right amount of desire.

Vidhya, a 37-year-old actor who was last seen in Sujoy Ghosh’s Kahaani 2, asserts that the kind of movies that are being made today with actresses breaking stereotypes are primarily stories that we are observing around us in real life.

Indian cinema is a reflection of society and truth, and these movies are nothing but realistic stories around us, Vidhya says that women are living their lives on their conditions, seeking their dreams, won’t take no for an answer and they know when to say no.

All of this is bound to encourage writers and audiences to love watching it. Vidya feels that she has been lucky that such intriguing scripts have come her way.

She has been a part of many award-winning films such as The Dirty Picture (2011), Paa (2009), Kahaani (2012), Vidya says that it’s been a different experience performing strong women on-screen. She’s happy that we are no longer just idealize women, not making them either perfect or dark.

Vidya feels it is also tremendous that the movies are doing well at the box office. Movies now don’t show women conquering a whole lot of problems and making sacrifices in life. It’s so amazing to look at how women are grabbing everyone’s attention because of their motivation, courage, and willingness to go after what they want in life.

Vidya admitted efforts are being done by some filmmakers to shatter the mold. She said that only 5% of portrayals are trying to do something different and break away from the pattern.

Vidya said that she opted for out-of-box movies mainly because she got tired of doing the same thing again n again on-screen and therefore looks for something different before giving her a nod for a plan.

In the past seven years, the diversity of roles have started increasing and she is picking up the best of the shots that are coming her way.

Vidya also said that the difference in income between male and female actors exists and it might take some time to alter things.

The actress feels that female actors expect to be paid better in at least ordinary commercial movies as they also contribute to the victory of such films.