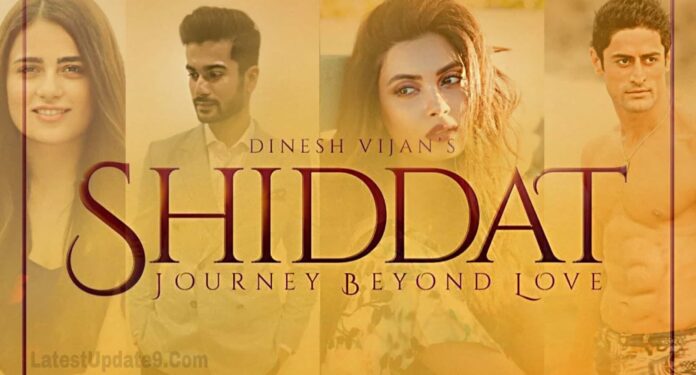 Shiddat is a movie produced by Dinesh Vijan’s Maddock Films and Bhushan Kumar’s T-Series, which will release on Disney+ Hotstar Multiplex on 1st- October.

The trailer of Shiddat, featuring Radhika Madan and Sunny Kaushal, was released on Monday, about three weeks before its release on Disney+ Hotstar Multiplex.

Shiddat is directed by Kunal Deshmukh. It is a story of two star-crossed souls engulfed in a trap of intense romance, as mentioned in a press release published by the producers.

The trailer introduces the viewers to Kartika and Jaggi, the accurate yin and yang pair. While there is shimmering chemistry between the couple, fate seems to have other plans, as the leading actress is all set to tie a knot with another person.

Along with the main couple, we also see Mohit Raina ooze some smoldering allure in his suave and spectacular groom avatar, while Diana Penty redefines glamour in a pristine and elegant bridal outfit.

As per the sources, Shiddat will explore whether or not Jaggi (Kaushal) can win Kartika I(Madan) back and Will their story end with heartbreak, or Does true love exists in today’s world or not.

Talking about the movie, producer Dinesh Vijan says that as a genre, love stories are evergreen. They have always been embraced by the viewers. A feeling every one of us has felt, the agony, the ecstasy, the whole gloriousness of romance is what they have attempted to seize in Shiddat.

Judging by the trailer, Shiddat seems like several other Hindi movies we’ve seen and appears to offer little in terms of recent.

Kaushal’s hero Kartika seems to be the same, flirty and harsh seeming man who has a heart of gold while Radhika plays a more emotional girlfriend who is in amazement at how different he is.

Nonetheless, the heavy-on-romance trailer can make the viewers tab a little uneasy because what is shown as love can be seen as a lethal addiction in the actual world.

The slickly cut trailer reveals visuals and pictures from the film that make it look like one has watched all that earlier.