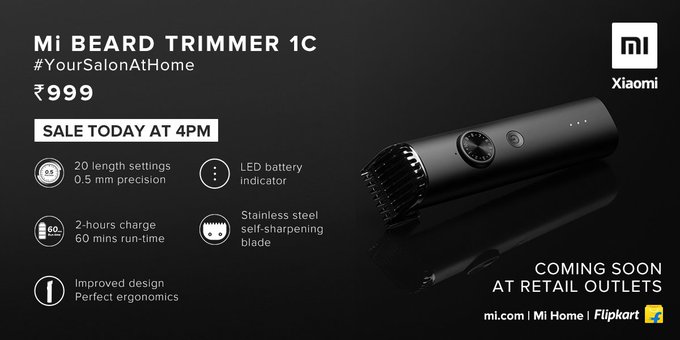 Xiaomi Corporation is one of the leading and well known Chinese electronics companies. The former has made its ingress into the personal grooming of Indian men which includes the launch of the Mi beard trimmer. The product was set in motion by the world by Manu Jain who is the global VP Xiaomi and MD Xiaomi India through the brand’s digital channels. And it is clear that the product is not a part of the Xiaomi ecosystem and it is completely made for the Indian culture.

Due to this pandemic hit, the need and usage of the beauty products is been increasing. Especially when it comes to men grooming, the importance is given in grooming their beard. Thus the firm figured out this need of the Indian men and launched the trim. The price of this product is Rs.1, 199, which is quite affordable and a trimmer worth this cost. About the orders, the booking can be made via the online website of mi and also will be available on Amazon from July 27.

Due to this pandemic, the salons and beauty parlors are been shut to avoid the virus. This led to the rise of the instant grooming routine at home. So men at various places, who aren’t much skilled on grooming and stuff, look at the DIY at various Youtube channels and instantly ordered trimmers. So it is completely online shopping would flood their grooming regime.

Coming to the ad film, it portraits the figures who are the former employees of the company. The four men who were in the ad film were men from different angles by their looks and stuff. The intention behind this the men from all sections of the country can use it and all the trimmer can work well for all types of hair. The product promises worth the spending also.

Nowadays, the urge of creating a new trend and following it up is the scenario. People are bored and tired of the hairstyles they wear. Every day they search for new branded things that make them look even better the next day. The Indian market is already flourished with the cosmetic products and this product is an add on to the same.

When it comes to the grooming part, one cannot distinguish women and men into separate categories. Thus the cosmetic and grooming market is an evergreen substance.

Passionate In Marketing - September 13, 2020
0
Cricket has always been a vital part of India, and the Indian Premier League (IPL) is like an annual trip. Millions watch...