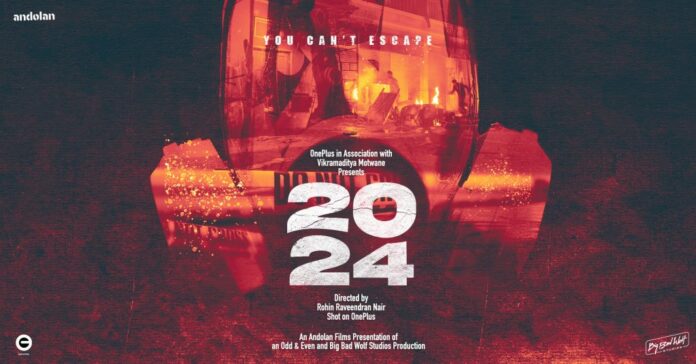 The film, a 60-minute thriller releases today on Disney+ Hotstar. It was made in association with Vikramaditya Motwane’s Andolan Production, Odd and Even Productions, and Big Bad Wolf Studios.

The story takes place in Mumbai, in a fictional 2024 era, and follows the journey of four gangsters who are faced with the challenges of a virus outbreak. The mutating virus plunges the city into chaos with many people rushing to find shelter.

Amid this havoc, Padma, the teenage protagonist, is set on returning to Dharavi to search for her missing brother, not heeding the advice of her three close friends who plan to take the last train out of the city.

As the film progresses, the four individuals are forced to make some tough decisions that constantly reflect on their conscience. The film displays the collective vigor and resolve of the human spirit that can help a community overcome any hardship if they unite for the greater good.

‘2024’ is directed by Rohin Raveendran Nair, featuring a young and talented cast including Mayur More and Muskkaan Jasferi, known for their roles in the Netflix TV series such as Kota Factory and Mismatched.

The film is written by Avinash Sampath, known for his work on Ghost Stories and AK vs AK. The Director of Photography for the film is Linesh Denai. Aloknanda Das Gupta is the music composer. Vikramaditya Motwane is the one responsible for providing the film with a clear creative direction.

The OnePlus 9 Pro camera, because of its hyper-realistic 8K 30 fps superior HDR video recording, ability to capture 4K at 120 frames per second, and in-built image stabilization, provided a seamless shooting experience. It has the first-ever Hasselblad Camera for a Mobile system and provides true-to-life colors with OnePlus and Hasselblad’s natural color calibration.

‘2024’ empowers aspiring filmmakers from the Indian community to use the power of smartphone technology to pursue their creative quests.

The film is available for viewing on Disney+ Hotstar from 24 November.