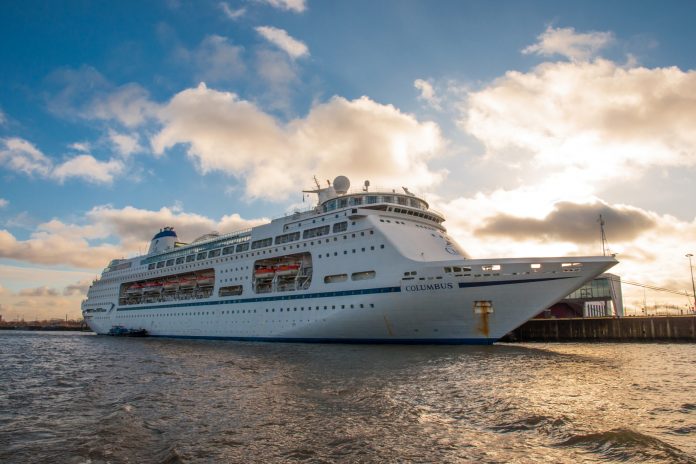 The MV Columbus is the most recent ship to dock at Alang this week. Summer vacation plans in Europe and other countries are being jeopardized due to the rising number of COVID-19 incidents. Cruise ships that have been idle for over a year are on their way back to the Alang shipbreaking yard in Gujarat. The 32-year-old cruise ship was constructed in France’s Saint-Nazaire. The ship has a capacity of 1,855 passengers and 700 crew members. According to an IE survey, the cruise ship was purchased by NBM Iron and Steel Trading Private Limited, a shipbreaker in Alang, according to a senior official from the Gujarat Maritime Board (GMB).

The vessel has yet to be beached, according to the official and is currently anchored in Alang’s outer anchorage. The cruise ship was recently renamed ‘MV Colus.’ According to the paper, NBM Iron and Steel Trading Private Limited has purchased its second cruise ship. Previously, the company purchased the MV Ocean Dream, which was one of six cruise liners that visited Alang between November 2020 and January 2021. Though four luxury cruise ships docked in Alang in January for dismantling, none arrived in February or March this year.

Not many cruise ships are being sold as scrap right now, according to Nadir Kaliwala of NBM Iron and Steel Trading. Even though the cruise industry has yet to open due to COVID-19, cruise ship owners are reluctant to sell because it would be a big loss. Many who are burdened by rising overheads, bank loans, or losses are forced to sell their ships for scrap. Many who are willing to do so have kept their ships in the expectation that the cruise industry will recover later this year, according to Kaliwala.

The MV Columbus was the flagship of CMV-Cruise Maritime Voyages, now extinct, and based out of Tilbury-London, United Kingdom, in the later stages of its journeys. It was auctioned in 2020, and Seajets, a Cyprus-based shipping company, bought it and sold it for scrap. The cruise liner, which was built in 1989, has 11 passenger decks out of a total of 13 and features two swimming pools, four restaurants, eight bars, two Jacuzzis, and 12 elevators. The last time it was renovated was in 2017.