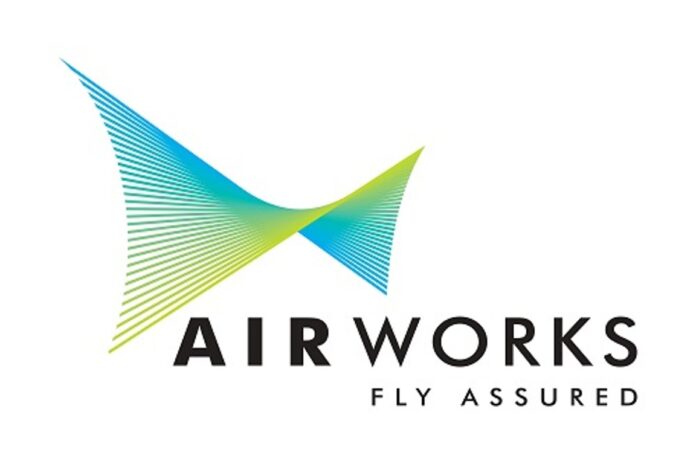 The brand’s logo represents an identity that is bold sturdy, bold, confident, and current, as it celebrates its 71-year record as the dominating player in the Indian Aviation, Aerospace and Defense space with a resilient and adaptive attitude. The new identity emphasizes Air Works’ capabilities and ideals while maintaining its mobility.

The company is preparing to assume a bold new persona that not only emphasizes its principles and industry-acclaimed workmanship but also reflects its market-leading position, on a global basis, using bright, assertive colors. Air Works, with its new brand identity, is well-positioned to cash in on these rising prospects as the Indian aviation and aerospace industry leapfrogs into a higher trajectory with burgeoning users both on the civil and defense side.

The new logo’s structural alterations include a wider space between AIR and WORKS to emphasize their distinctness, as well as a shift in the color of the letters AIR WORKS from black to a more assured and cooler blue. The logo also replaces the old vignette with prominent colors.

The logo’s lines weave a story, with infinite possibilities, an innate receptivity to change, and the quintessential Air Works’ adaptability that has helped the company survive for over 71 years, while reinventing itself all the while to stay ahead of the curve and lead the transformation of India’s aviation and MRO ecosystem. Meanwhile, the ‘FLY ASSURED’ brand promise remains unchanged, sending a message of change while maintaining consistency.

Given that Air Works is gradually expanding into a more structured, digital, collaborative, transparent, and visible organization, the new identity is well-timed. Using technology revolution in the form of 3D Printing Solutions, the brand has expanded its wings and included segments such as Defense and Aerospace to its portfolio. In recent years, the company has grown both in terms of capacity and geography.

In the Engineering & Maintenance space, the rising market has bred fierce competition among regional firms (APAC & the Middle East).Air Works has accepted its new identity to reinforce its dominant and distinctive position, as well as to fuel our next phase of expansion in this decade, in tune with this ever-evolving dynamic.”

With a pan-India presence in 27 locations and close to 1,500 people, Air Works is not only India’s largest provider of International Line Maintenance services to major airlines, but it is also qualified to maintain more than 50 types of aircraft, making it the country’s most varied MRO. Apart from MRO-related services, it also offers commercial aircraft asset management, avionics, cabin and interiors solutions, 3D printing, and aircraft refinishing.

Author - January 26, 2022
0
Small kiosks called mom-and-pop shops are a staple of a local retail economy. In India, they are called Kirana stores and these...