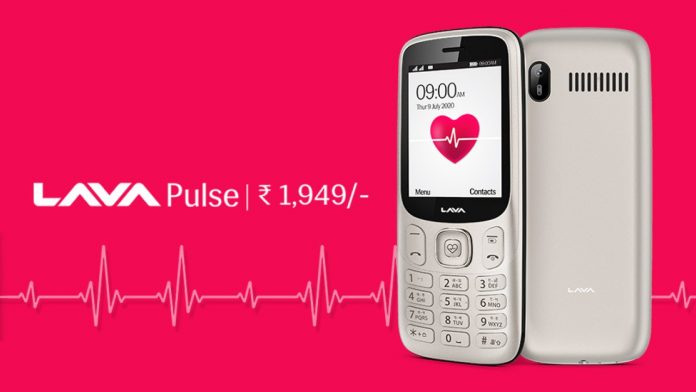 Lava launched the new feature phone named Lava pulse to the market with incredible features like Smartphones. The phone measures the heart rate and blood pressure sensor with one touch. The most surprising fact is that the phone only costs Rs.1599 and is available on most of the e-commerce platforms and 100000+ retail stores.

Lava Pulse is very user friendly when it comes to its user interface and to measure the heart rate and blood pressure, you just need to place the finger on the sensor and the phone provides the results. Lava not just measures the heart-rate and blood pressure but also, if the user wants to share the health statistics with others, they could do that too. The phone features will be worth the money spent and will also be very useful in daily life because as far as people facing serious health issues are concerned, it will help them know about the current conditions of their health. Also, the phone is very easy to carry compared to the pressure monitoring digital devices.

The Lava Pulse has some basic features such as the phone will support a storage card up to 32 GB. The battery of the Lava Pulse has the capacity of 1800mah units and also the user can use it in a super battery mode to assure more backup. The company claims that in a single charge the phone could last up to 6 days with the support of super battery mode. Lava Pulse can use the dual sim with auto call recording feature. There is a wireless FM also included in it. The company promises 1 year replacement service for the customers.

The accuracy of measuring heart-rate and blood pressure sensor in Lava Pulse has not yet been confirmed, but the company claims that it has the accuracy like an electronic heart-rate and blood pressure devices. Till date, only the premium ranged flagship smart phones of Samsung Galaxy have such a feature. If this phone shows accurate health statistics too, it is sure to take up the market and be one of the front runners, undoubtedly.