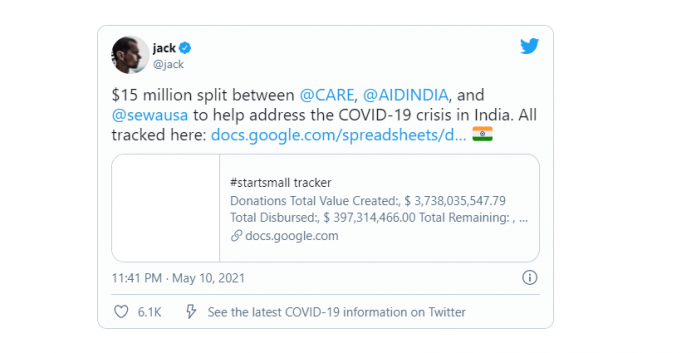 The second wave of Covid 19 came as a disaster and have severely affected the lives of millions of people in India. After a major shift in 16 years old policy, India has now started accepting donations, gifts and other aids from foreign nationals and companies. Many big tech companies like Google, Microsoft and Amazon are coming forward to help India recover from this pandemic. Moving along the same line, now, an American microblogging and social networking site Twitter has extended its helping hand by donating USD 15 million to help India battle against the crisis.

Twitter CEO Jack Patrick Dorsey stated that he had donated the amount in his personal capacity to the three NGOs – Care which is providing PPE kits and other essential health supplies to Indian hospitals, Aid India which is identifying Covid symptoms, prevent spread, access healthcare and treatments into the under-resourced communities and Sewa International USA which is procuring life-saving equipment such as oxygen concentrators, ventilators, BiPap and CPAP machines.

A total of USD 10 million given to Care while Aid India and Sewa International USA received USD 2.5 million each for their services. All medical equipments are dispensed to government hospitals and Covid 19 care centres across the country. Mr Sandeep Khadkekar, Sewa International’s Vice President for Marketing and Fund Development, thanked Mr Dorsey for his princely donation and for recognizing their NGO and believing in them.

He further added that his NGO is volunteer-driven and it believes in serving all, following the sacred Hindu benediction, “Sarve Bhavantu Sukhinah” whose English translation is, ‘May all be Happy’. He continues that his organisation’s administrative costs are about 5 per cent, which means that every dollar a donor offers, they spend 95 cents of it on its assigned work.

To maintain transparency, Dorsey has been tracking contributions from it on a Google Sheet open to all and according to the tracker, he had already distributed around USD 397 million to various organisations.