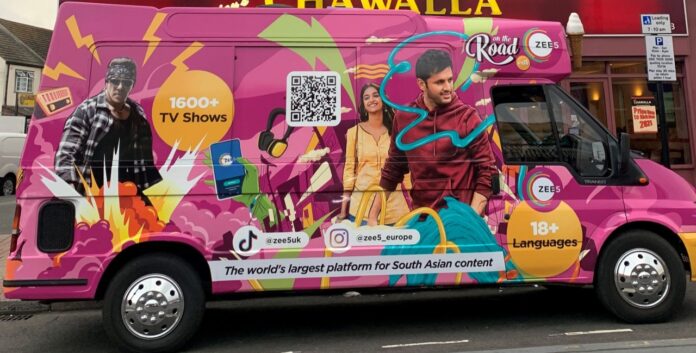 The world’s largest streaming platform for South Asian content, ZEE5 Global, newly took to the streets in an iconic ice cream van to fulfil Londoners their favorite sweet serves and familiarise them with incredible tales from the Indian subcontinent.

The campaign, named “On The Road With ZEE5”, was a big accomplishment, attracting the public ranging from the youth to the youthful.

Over 3 days it got spread, with the ultimate day being the engagement around Kenton, Kingsbury, and Harrow after the rumor it originated.

The van made particular stops to connect with Londoners like TikTok influencer Salwa Aziz and her family and regional councilor Ajay Maru, who not only enjoyed the free ice cream but also liked the inspirations to the world of South Asian entertainment.

Many new Londoners adored the concept of a global yet deeply South Asian protocol, which they and their families could engage with to keep in touch with their South Asian origins.

Fascinated by the brightly colored van and its catchy melody, enormous crowds of Londoners in Southall, old Southall, and Broadway, and local companies as Mogas and Lyca Radio came to check out the van.

Lyca Radio also starred ZEE5 Global on its radio station, fascinating several people who then came peeking for the ZEE5 van. Londoners going for dinner were also delighted to grab a soft-serve after their dinners.

Youths on their way to Asian bistros and diners also came out to check out what ZEE5 had to offer.

Youthful influencers Fizzah Sayed, Karan Paglani, and Nissa Hussain and her family were also incredibly delighted to not just eat ice cream but also truly make relation with family through the arrangement of South Asian stories on ZEE5.

Archana Anand, Chief Business Officer of ZEE5 Global, said that they have had a fun weekend conference and interacting with folks of all ages all over London.

The city’s heart and soul resonate deeply with everything that ZEE5 stands for, and they look forward to continuously attracting Londoners to their loved tv shows and movies from South Asia.

With the incredible reaction to this campaign, they look ahead to bringing more such fun endeavors from the World’s Biggest Streaming Platform for South Asians.

ZEE5 Global devotes a rich and distinct theme library that comprises an array of live news channels and 160,000 hours of endless streaming over TV shows, Movies and Originals.

Delivering entertainment in over 18 languages including Hindi, Bengali, Telugu, Tamil, Marathi, Malayalam, Kannada, Punjabi and other languages as well, it also has key content dubbed and subtitles in English.

Praveena - August 15, 2022
0
It is nearly hard to recall a pleasant occasion without remembering the delicious meal that was served, along with the people who...