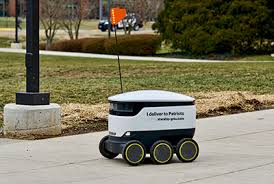 Nuro is a self-driving start-up that focuses on an autonomous delivery system. When asked why they did not focus on cars their reply was honest. A street-legal self-driving car needs an extremely large amount of initial investment before they can be even considered road safe, the technology might require years of development. In the case of Nuro, the timelines are shorter, the initial investments are less and there is a distinct possibility of gaining revenue faster. With the Covid-19 crises rolling on, it seems like a wise decision.

Because of the current climate, the start-up has received offers of further investment and partnerships from numerous organizations like Krogers KR, Walmart, Domino’s pizza, and several food banks. The demand for contactless delivery has gone up drastically. The company initially raised 1 billion USD from Softbank’s Vision Fund, now that amount has increased further. Several companies have increased investments into an autonomous supply chain via technologies used for robot axis or automated trucking services being developed by Nuro and other similar companies. It’s a lot easier to establish a business case for an autonomous supply chain and distribution system as limitations are easier to impose as opposed to a self-driving car transporting people.

The Nuro R2 delivery bots, half the size of a passenger car, carry goods, and are designed for urban and suburban streets. The top speed of this delivery bot is only 25 miles an hour which translates to 40 kilometers in the metric system. The bots are equipped with all the standard sensors and cameras similar to a passenger-centric vessel, but the occupant is not a concern when dealing with safety as they are meant for solely transporting goods. The bots are designed with the latest advancements in self-driving AI and further research is being conducted at every stage to refine the process as much as possible. The Nuro delivery bot is specifically designed to slow down considerably when there are vulnerable road users like pedestrians’ kids or cyclists. It is designed to avoid these obstacles as much as possible.

The company has already gotten US government approval to deploy these vehicles in a handful of communities in San Francisco. It currently uses modified Toyota Priuses to run initial tests as their fleet of Nuro R2s are built up. These bots were made available for Covid-19 treatment centers in California in April during the initial outbreak. In Houston, they launched the delivery of prescriptions to online orders.

The technology is likely to see widespread adoption in the next 2 years as its effectiveness is demonstrated to the masses. The demand for an autonomous solution that works has risen drastically this year and we are likely not going to go back to manual once proper platforms are fully developed. This start-up now has a 2.7-billion-dollar valuation and everyone wants to see them succeed.