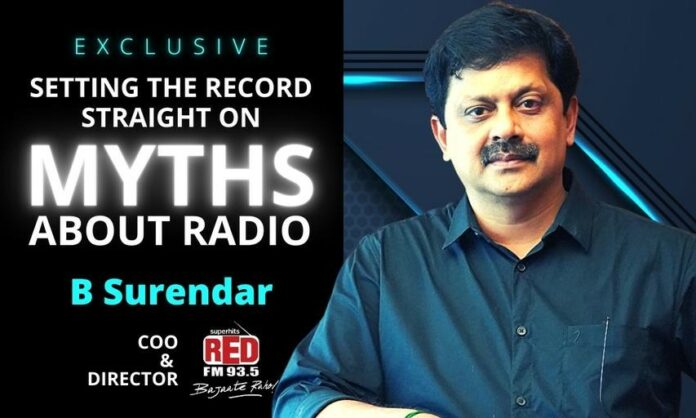 The pandemic impact of the past two years around has only strengthened this special bondage people seem to possess with Radio & Radio Jockeys. Media research conducted during pandemic times here and abroad had indicated a sharp increase in overall reach during this era with a natural-but-temporary skew towards at-home listenership. Advertisers, on the other hand, took a little longer but re-established their faith in the medium, and the sector has seen robust increase in ad volumes with ever better yields over the last 9-10 months.

Despite all of the positive press surrounding radio and its acceptance, there are always ‘Myths and Misconceptions’ about this intimate, free-to-air, and easily accessible medium. This is precisely what drove me, as a senior industry professional, to investigate and clarify a number of these issues right here:

Myth 1: Radio should only be used as a reminder or frequency medium in your media plan

Radio is a passive medium that will be consumed while doing other activities, allowing for mass reach (last checked listenership of 22.3 crores or more in India), but this in no way diminishes the impact of the content/ad because the audio route to the audience’s mind space may be less clutter-free than the video route.

Myth 2: Radio listenership has been impacted since the introduction of certain cell phones and music streaming apps

The introduction of mobile phones in India practically coincided with the launch of FM radio, resulting in exponential growth in listenership across all age categories. While there are a few not-so-popular smartphones that do not have a radio choice, a random survey of mobile stores in several cities indicated that even today, 90 percent of phones have an FM radio option, extending the reach of the medium in our country.

Myth 3: Millennials and the younger generation do not listen to the radio sufficiently

While the emotional bond between millennials and thus the younger generation in India Radio is strong, and their audience is growing in tandem with the medium’s rapid geographical expansion, it’s interesting to examine the most recent trends on this front in a highly developed radio market like the United States.

Advanced research studies from around the world have repeatedly shown that striking a judicious balance in ad spending between traditional and digital media (say, a 71:29 ratio or so) and spending across multiple platforms can provide advertisers with the best return on investment when compared to focusing on a single medium.

This powerful hyper-local medium which is imagined to possess grown even in a very complicated media market rather like the USA by 12% in 2021 and is predicted to grow by 6% in 2022, incorporates a way bigger scope in an emerging economic powerhouse like India. On merit, Radio which may well be a highly under-estimated medium here deserves the simplest way better understanding, particularly from the B2B community.