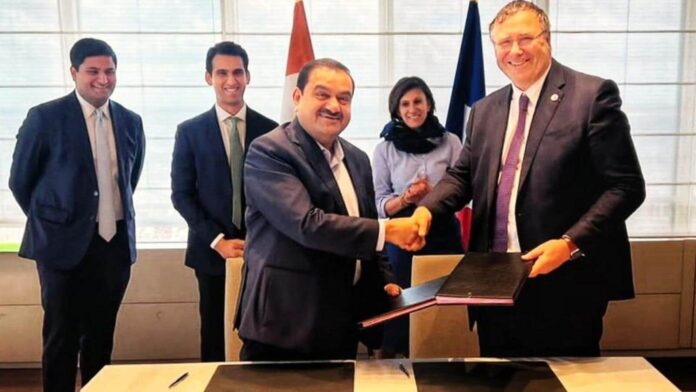 According to an exchange filing by Adani Enterprises on Tuesday, French multi-energy major TotalEnergies would spend at least $12.5 billion for a 25% share in a new sustainable energy services business Adani New Industries Ltd. Adani New Industries will be developed in collaboration with TotalEnergies by billionaire Gautam Adani’s Adani Enterprises Ltd.

According to a statement released by Adani New Industries, the company plans to invest more than $50 billion in green hydrogen and its ecosystem over the next ten years.

Adani New will create a 1 million tonne per year green hydrogen generation capacity in the first phase before 2030.

“The new cooperation, which is centred on green hydrogen, is likely to revolutionise India’s and the world’s energy landscapes. Adani and TotalEnergies are both pioneers in energy transition and sustainable energy adoption, and this collaborative energy platform bolsters both firms’ public ESG commitments “announced the two businesses.

“Secondly, diesel accounts for 50% of all transportation fuel in India, while petrol accounts for 20% and aviation fuel, LPG, and other fuels account for 30%. CNG, electric vehicles, biofuels, and other advances are happening in the petrol-driven area, but not in the diesel segment.

Diesel is mostly utilised by trucks that are too heavy and require too much power to be powered by an electric battery. Only when hydrogen-led fuel cell technology becomes accessible, which could take another 3-4 years, will trucks be able to transition to new energy.

When hydrogen fuel cells are introduced, 50 percent of India’s oil demand may be transformed, and this is where the tremendous potential for green hydrogen in India lies.

TotalEnergies stated in its most recent financial report that, due to significant cash flow creation, the board of directors opted to prioritise countercyclical potential to accelerate the company’s development.

Passionate in Marketing - June 29, 2022
0
A recent survey by Deloitte reveals that a high percentage of Gen Zs feel stressed, aren’t confident whether they will be able...