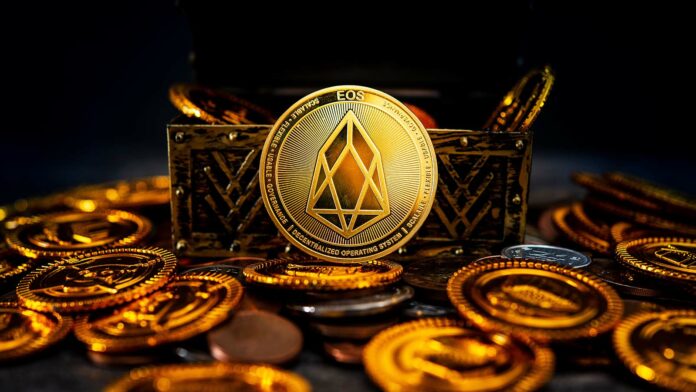 EOS is gaining momentum and attempting to establish itself as one of the top cryptocurrencies to invest in. Let’s learn more about EOS.

What exactly is EOS?

EOS coin is a blockchain-based decentralized system infrastructure that allows commercial decentralized apps (dApps) to be hosted, developed, and deployed on its platform.

Unlike other blockchain-based networks like Ethereum, EOS targets crucial blockchain flaws and attempts to address scalability, scale, and flexibility issues. EOS is not based on the concept of mining. Instead, only block producers generate blocks, and for each one, they are paid with newly issued EOS tokens.

Why invest in EOS?

Every day, the market for dAPP is expanding. As a result, one of the most significant challenges is the limited resource availability on the network. Increased fake transactions, spamming apps, restricted computer capacity, slow execution speeds, and other factors all contribute to network restrictions.

EOS has been dubbed the “Ethereum Killer” because of its ability to perform 100,000 transactions per second. EOS aims to address these difficulties by increasing usability, flexibility, and scalability. The EOS coin is notable for enhancing usability without causing performance difficulties across the network by leveraging parallel execution and asynchronous communication techniques.

The numerous features of EOS help to facilitate the flexibility it provides. Its ownership structure allows people to use it without restriction. As a result, customers pay lower transaction costs since developers can use resources as and when they are needed, as opposed to the traditional pay-per-transaction system. Furthermore, developers can plan for hosting costs.

Many investors are drawn to EOS because of its flexibility, scalability, and user-friendliness. During its initial release, it drew a lot of attention. The EOS team is continually working to improve the platform’s innovativeness.

In today’s fast-paced world, EOS’s vision of a quicker blockchain is attracting a lot of attention.

Prospects for the Future

The price of EOS jumped from US$2.43 per token to US$3.47 per token in 2020. It hit an all-time high of US$12.95 in May 2021. However, following the market turbulence, it dropped to US$4.26. Experts feel that EOS will develop significantly in the long run due to its tremendous pricing potential and benefits.