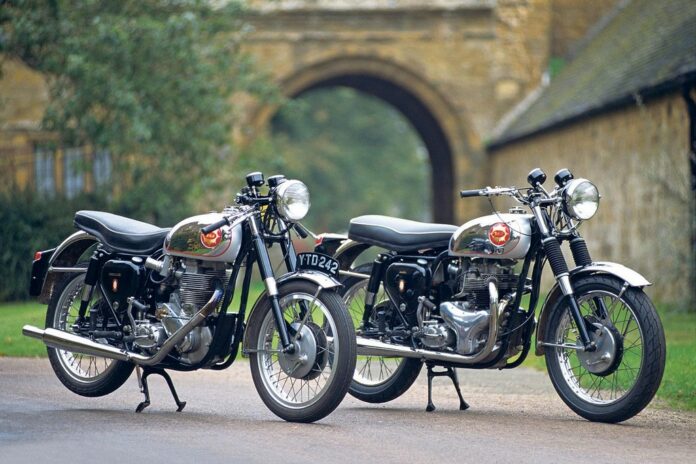 Mr. Anupam Thareja, Co-Founder of Classic Legends, said of the new motorcycle, “The new BSA Gold Star was created in the UK, engineered in the UK, industrialised in the UK, but most significantly, envisioned in the UK.”

This bike is meant to be an ode from the United Kingdom to the rest of the world. BSA is more than a motorcycle; it’s a way of thinking, a freeing sensation, a philosophy, and affection. We wish to pass on that love to you. This is an avatar that honours the true motorcycling spirit of BSA.

The new Gold Star is pure and keeps the spirit of its predecessor, such as the round headlamp fitting neatly below the trademark twin-pod instrumentation – all while maintaining the same proportions.

The chromed fuel tank with pinstriping and a commanding BSA Gold Star badge, which was inspired by Wal Handley’s coveted ‘Gold Star’ pin won in 1937 when he lapped the Brooklands circuit at over 100mph on a BSA Empire Star, is another standout feature.

Add in the engine cover, which is reminiscent of vintage BSAs, the distinctive kink in the exhaust pipe and silencer design, and the hallmark stays on the rear fender, and it’s evident that everything stays faithful to the classic Gold Star design.

“For us, the new BSA Gold Star is not just a motorcycle, but an emotion,” said Mr. Ashish Singh Joshi, Director of BSA Company Ltd., “and we pursued the adventure of bringing BSA back with absolute love.” The new Gold Star was developed and engineered in the United Kingdom to stay true to its traditions. The new motorcycle blends BSA’s DNA and maintains the Gold Star’s history.”

BSA Motorcycles will be present at Motorcycle Live, which will take place at the NEC Birmingham from the 4th to the 12th of December 2021. Hall 4, Stand 4D10 is where they will be exhibiting.

Author - January 20, 2022
0
Mexican officials have seized Kellogg’s for violating sugar and other content labeling rules in a country with one of the world’s most...