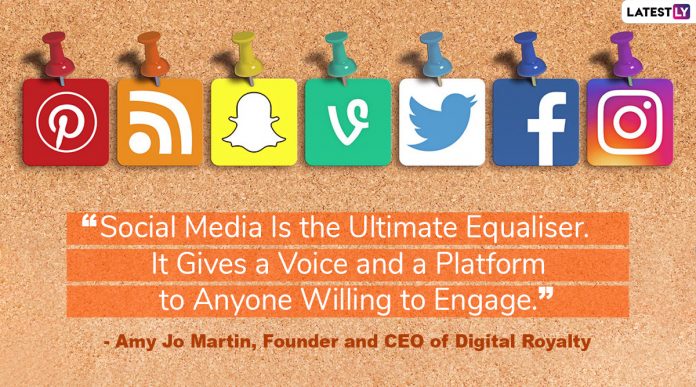 We cannot imagine our lives without Facebook, LinkedIn, Twitter, Snapchat, Whatsapp today.  As everything has digitalized now, more than half a billion new users have joined social media over the past 12 months. It has helped people to be in touch with friends and family, entertain themselves and stay informed regarding the current situation.

Mashable launched World Social Media Day on June 30. It was launched to recognize social media’s impact on communication and to bring the world together to celebrate it. Each one of us uses social media every day, that’s how we stay connected with people across the world in a simple and fast way. Mashable uses social media to bring together various cultures, fandoms, and movements and this is why they wanted a day to celebrate it. Social media users use the hashtag, #SMDay every year, and this year, it’s your turn to get involved.

As social media has evolved and become so popular, so has the scrutiny that the platforms come under. With controversies regarding their election results, fake news, use of data, hate speech, and impact on mental health, the social media platforms are under more pressure to be transparent.

The government has also started making use of social media platforms to keep the citizens aware from time to time by instant messaging and stay in touch with them.

Social media is an open platform where people showcase their talents, tell their stories, and also make money. It has also been helpful for people in these pandemic times, as influencers, bloggers and celebrities have helped people get access to oxygen, medicines, financial aid, hospital beds, ventilators, plasma information, etc.

Not only has social media impacted global communication, but it has also played a major role during this Pandemic. Since last year, the country was under lockdown, social media has been a source of happiness in these times. People were connected to their friends and family through social media platforms; watched funny and entertaining videos, brought out their creative side by creating content for social media; learned new skills such as cooking, painting, dancing, singing, etc. via videos created by influencers.