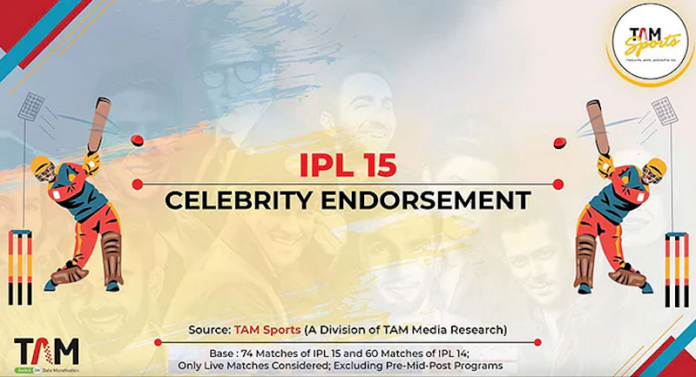 The 15th edition of the TATA Indian Premier League (IPL 15) witnessed celebrity-endorsed advertising which accounted for 54% of the ad volume according to a report. According to TAM Sports, the share of commercials endorsed by celebrities based on average ad volume per channel per match, in IPL 15, increased by 6% when compared to IPL 14.

A prominent point to note is that, compared to the previous Indian Premier League edition, the overall number of celebrities endorsing ads in the 15th IPL edition was reduced by 12%.

Shah Rukh Khan was on the top with a 9% share of ad volumes during the matches of Indian Premier League 15, whereas Ranveer Singh topped the 14th IPL. Both Shah Rukh Khan and Ranveer Singh are veterans in the Bollywood film industry. 3 out of the top 5 overall celebrities were common in both IPL 15 and IPL 14.