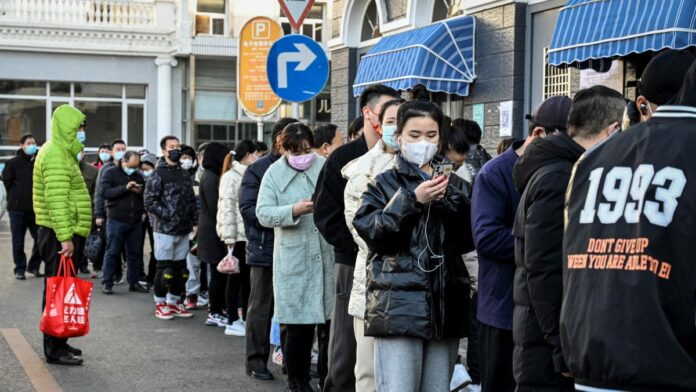 China’s uncompromising commitment to eradicating all traces of the coronavirus with a zero-Omicron strategy is putting the economy and supply networks at risk.

Goldman Sachs recently lowered its 2022 growth prediction for China from 4.8 percent to 4.3 percent. That’s about half of what they expect growth to be this year.

If China increases containment measures to numerous cities, the analysts see a “deeper interruption of services” as a high risk. That would be China’s most serious and widespread endeavor to restrict the coronavirus since lifting the enormous lockdown on Wuhan, the virus’s original epicenter, in April 2020.

In recent days, the COVID-19 Omicron version has surfaced across China, especially in important port towns such as Dalian and Tianjin, prompting restrictions that could disrupt economic activities in those areas.

As the rest of the globe adjusts to the virus, experts believe China’s zero-tolerance policy will cause more harm than good in 2022. Omicron could hit companies and supply lines, exacerbating the economic crisis.

According to CNN, an emergence of the older Delta form led the industrial hub of Xi’an to close earlier this year, impacting the production lines of global chip giants such as Samsung (SSNLF) and Micron (MU).

There are also Omicron cases, which have been found in key port cities. Ship congestion at Chinese ports has recently worsened as additional towns impose strong COVID limits in response to the breakouts, or tighten testing policies in front of the Chinese New Year holiday season, which begins on January 31.

Truckers bringing in laden containers have been restricted at the Shekou terminal in Shenzhen. Truckers can only enter the terminal starting Friday if they have reservations for export-bound cargo on vessels arriving within three days, according to a statement released this week by the operator, reported CNN

Containing an aggressive variety could come at a high cost in terms of money. Nomura analysts noted this week that increased lockdowns might hurt retail sales and other services and that the benefits of zero-COVID are likely waning while costs are rising. According to CNN, they predict GDP growth of 2.9 percent in the first quarter and 4.3 percent for the entire year of 2022.

Meanwhile, the failure of China’s zero-COVID policy has been dubbed the top global geopolitical risk for 2022 by Eurasia Group president Ian Bremmer and Chairman Cliff Kupchan, implying that a breakdown might result in larger breakouts, more severe lockdowns, and greater economic damage.

The 2022 Winter Olympics will be held in China in February, making the containment of Omicron critical soon.

When the Chinese Communist Party’s 20th Party Congress takes place in the second part of this year, President Xi Jinping is largely expected to seek a historic third term in office.

Author - May 17, 2022
0
Surging inflation is becoming a headache for companies and consumers alike. Rising input costs are putting a big drag on companies’ earnings,...