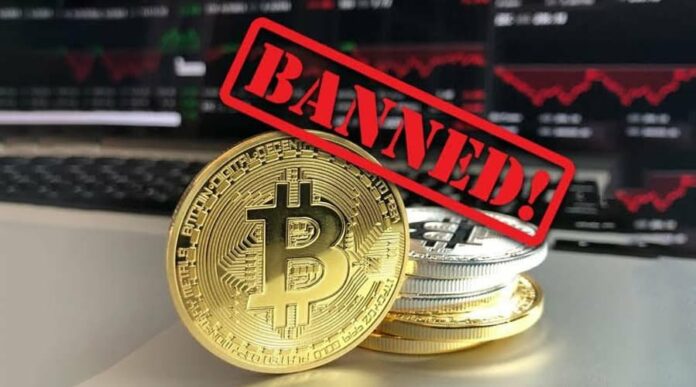 With the cryptocurrency craze spreading like wildfire throughout the world, everyone wants to join in on the action. The world’s largest cryptocurrency, Bitcoin, is now selling for over Rs 33 lakh while, Ethereum, the second-biggest, is trading for about Rs 2.3 lakh. However, some countries have closed their doors to cryptocurrencies and have put a strict ban on these digital tokens.

Here are five countries that have imposed an embargo on cryptocurrencies:

There was a period when China boasted about having the most Bitcoin miners in the world. In little time, the tale had taken a complete 180-degree turn. Today, the nation has prohibited cryptocurrency trading for reasons that are unclear to the general public. According to sources, the prohibition aims toward lowering energy prices and the greenhouse gas emissions linked with cryptocurrency transactions.

Russia’s central bank stated in September 2017 that it was against regulating cryptocurrencies as actual money. All cryptocurrency market sites, including Bitcoin, are prohibited in Russia. Though industry analysts are unsure whether the Russian government would permit cryptocurrency trade, there is always hope.

Trading in cryptocurrency is ban under local banking rules. Trading in foreign currencies, especially decentralised ones such as cryptocurrencies, is prohibited by the Central Bank of Bangladesh. The laws and regulations of Bangladesh are so strict that if anybody breaks the law, that person may face a harsh penalty, including years in prison.

Cryptocurrency transactions are illegal in Egypt under the country’s Islamic legislation. In an opinion piece, Dar al-Ifta, an Egyptian Islamic advisory firm, warns that crypto-assets could destabilize Egypt’s national security and economic health and avoid risk in cryptocurrency investment.

Morocco’s foreign exchange office had notified the citizens that dealing in virtual currency was an “infringement” of forex laws. Trading in cryptocurrency in Morocco also ban in 2017. However, allegations of illegal Bitcoin trade expanding fast in Morocco have recently appeared online.

Other countries that have recently banned or restricted the use of cryptocurrencies are Turkey, Iran, Algeria, Bolivia, Colombia, Indonesia, Nepal, and North Macedonia. However, as cryptocurrency gains traction globally, this is beginning to change, with some countries, such as El Salvador, even officially adopting Bitcoin.

Anju Rajan - December 2, 2021
0
The animation industry is expanding at a quicker rate than ever before, thanks to children. Masha and the Bear, Peter Pan, Cinderella,...