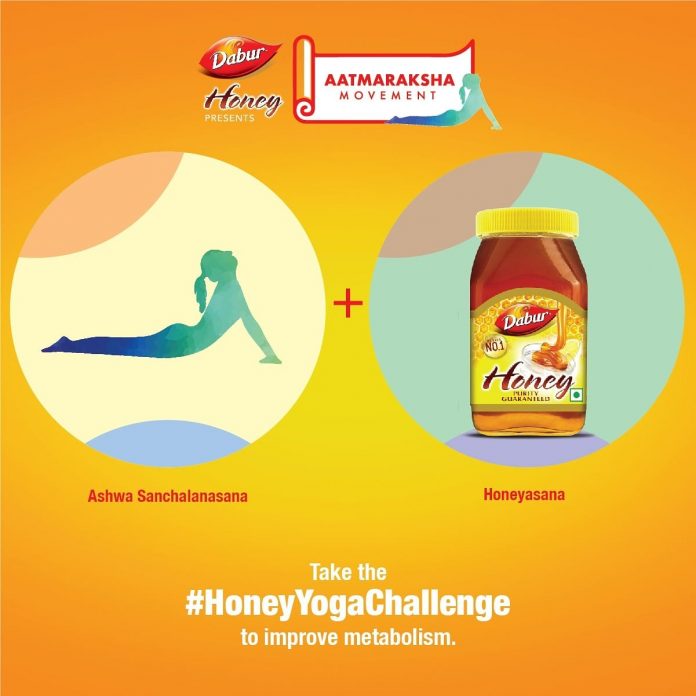 Practicing Yoga normally is believed to have various health advantages and other benefits too. On blended Dabur Honey together with Yoga, they form the ideal answer for a healthy lifestyle. In the present situation, with the entire nation unlocking, organizing wellbeing or health is of utmost importance, and this is actually where the Dabur Honey campaign originates from.

In this International Yoga Day, Dabur Honey has to lead a health campaign, AatmaRaksha Movement, that is through the #HoneyYogaChallenge. The company encouraged everybody to do whatever number Suryanamaskars (Yoga practice) as possible to do under this hard time. Suryanamaskar, or Sun-salutation, is a famous asana/ method that improves overall health, reinforces the body’s immune system, and relaxes the mind. The film encourages individuals to combine this Yoga exercise with a glass of lukewarm water mixed with Dabur Honey and make it a wake-up routine for best outcomes. The campaign is supported by Mandira Bedi, an exceptionally recognized fitness enthusiast.

When talking about supporting the movement, Kunal Sharma, Category Head of Dabur Honey, and Glucose said that “In this present occasion, Yoga is being increasingly adopted as an exercise to keep oneself healthy and on the same time build one’s immunity to keep themselves secured. Dabur Honey has chosen to change this into a movement on International Yoga Day as the “AatmaRaksha Movement”. To build engagement and commitment, we have decided to give it a spin called the #HoneyYogaChallenge.

Commenting on the campaign idea, Azazul Haque, CCO of Mullen Lintas said that, “There are numerous various Indian practices that build the human immunity. Drinking Dabur Honey regularly with warm water is one of them. Second Indian Practice that assists in Boosting immunity immensely is Yoga. On International Yoga Day of June 21, Dabur Honey’s idea of instructing individuals about the immunity-boosting benefits is based on the two Indian practices, which are told earlier.  A completely advanced digital campaign is also a concept-oriented one to each individual about the immunity benefits of Yogasanas and drinking Dabur Honey day by day. Given occasions of today, when human immunity is critically important, they think that such an effective campaign will give a boost to the growth of Dabur Honey along with the immunity of the consumers

Author - January 27, 2022
0
Recently the government has passed many laws relating to many assets of their nature. But their taxation part is not clear.