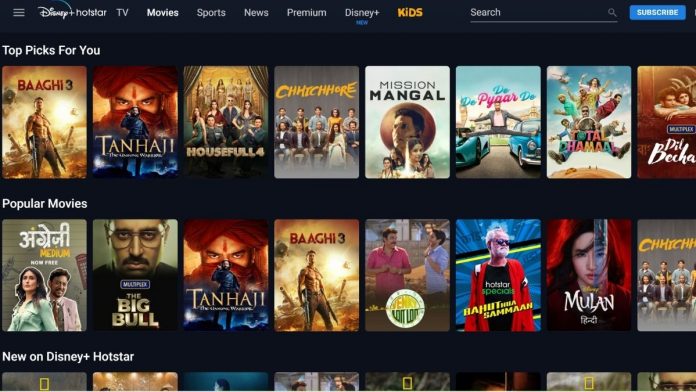 Disney+Hotstar has launched new subscription packages for the users as they look to widen their reach across the country and add to its user base with fresh contents of nearly 20 Indian originals across new series and movies.

Similar to those strategies introduced by Netflix and Amazon Prime Video. From September 1 onwards Disney+Hotstar will be introducing a yearly mobile-only plan for Rs 499; a new super plan costing `899 will also be introduced to consumers on the same date. The company will be enhancing its premium subscription plan of Rs 1,499 by adding device flexibility. Subscribers will be having complete access to the content catalogue. The pricing plan has been tweaked at a time when more Indians are experimenting with content on OTT platforms. The pandemic has caused a suspension to the theatres which made people switch over to OTT platforms. Companies such as Disney+Hotstar Netflix and Amazon Prime Video have invested much in developing a multilingual content collection. There was an increase in OTT investments of $700 million as compared with the year 2019, as per the reports of Media Partner Asia. Sunil Rayan, president & head, “With the newly announced plans, viewers will be given with best-in-class entertainment, allowing them to choose plans that suit their needs,” Disney+ Hotstar added.

Due to the popularity of Disney+Hotstar which can partly be added to sports especially cricket which had a huge influence in India. The OTT firm had announced that they will introduce live stream cricket tournaments like Vivo IPL 2021 and the ICC Men’s T20 World Cup, all within the next six months, and also live streaming of upcoming Tennis, Football and F1 tournaments. Increasing competition in the local OTT platform is also rising due to the growing appetite for digital services. There was an aggressive increase in acquiring direct-to-OTT movies by Disney+Hotstar, Netflix and Amazon Prime Video to keep their consumers intact to the flow of contents. The new subscription includes movies like Ajay Devgn starrer Bhuj: The Pride of India, Saif Ali Khan-led horror-comedy Bhoot Police, season 2 of web series Arya featuring Sushmita Sen, Six Suspects starring Pratik Gandhi among others. These shows will be collectively streamed across 2021 and 2022.

Jesna Jexan - November 30, 2021
0
BIG FM has captivated a wide audience through its comprehensive approach to all platforms and introduced this platform- ‘Big Living’ where products...