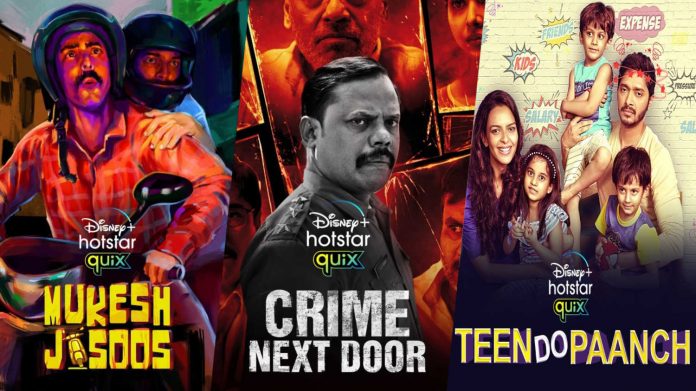 Disney+Hotstar has launched a bouquet of snackable shows that will pack a punch by delivering king-sized entertainment. These short-format titles bestow us easy viewing entertainment programs. Disney + Hotstar has brought together, some of today’s most popular names in digital shows. Some of them will highlight characters like Mandira Bedi, Vidya Malavade, Poonam Dhillon, Barkha Singh, Tanuj Virwani, Vikram Singh, Anupriya Goenka, and many others.

This show consists of different genres such as crime thriller, comedy, romance, and the titles of this show are ‘Mukesh jasoos’, Bamini and Boys, ‘Murder Meri Jaan’, Teen Do Paanch’,’ Six’,’ Shit, Yaar,’ Crime Next Door’, Chassis Aur Maina. By May 7, new episodes of these titles will be broadcasted every day in Disney+ Hotstar. Disney+Hotstar viewers can now have fun with high-quality short-format content.

Chattis Aur Main is acting as Sandeepa Dhar and Vikram Singh  Chauhan. Their episodes portray a beautiful love story between Chattis and Maina. Here, we could see two people who love chalk and cheese, lives in a brimming town named Dhoopur. ‘Visphotak   Angels’, the dance troupe, who has arrived in town for the wedding season. ‘Rani Angel’ aka Maina disagreed with the neighbourhood good boy. Chattis, the son of a local failed politician Mehak Singh. At the end of these episodes, we are left with many unanswered questions. People are curious to know, whether Maina and Chattis will have a happily ever after life or will they fall apart.

Six staring actors like Mandira Bedi, Nausheed Cyrusi, Dipannita Sharma, and Sid Makkar-Kashish Sura. They are casting as a well-off businessman, settled and successful respectively. They are murdered in the peak hours of the night as the world welcomes the new year. However, the mystery of the murder is revealed by investigating officers, A team led by Ruhana Dhulaap, and they will find six clues to this murder case. The interesting twists and turns of this show make it a success. Everyone will be in search of the killer as well as the motive behind the murder. I could assure you that, this one will be everyone’s favourite, and is likely to have more fan-base.

The next show is, Murder Meri Jaan starring Tanuj Virwani along with Barkha Singh. Sonal Arora is depicted as an adventurous runaway Con Bride, who finds her broken due to her fake marriage with ACP Aditya, the top-rank investigator of the Bhopal Police. This destiny of her bestows her an opportunity to unveil the murder mysteries. Whereas, ACP Aditya is lost in between as his boss and colleagues are also very keen to get hold of the biggest criminal in the area “Looteri Dulhan’’. It’s time for you to watch some amazing Disney shows. What are you waiting for, tune on to Hotstar+Disney?