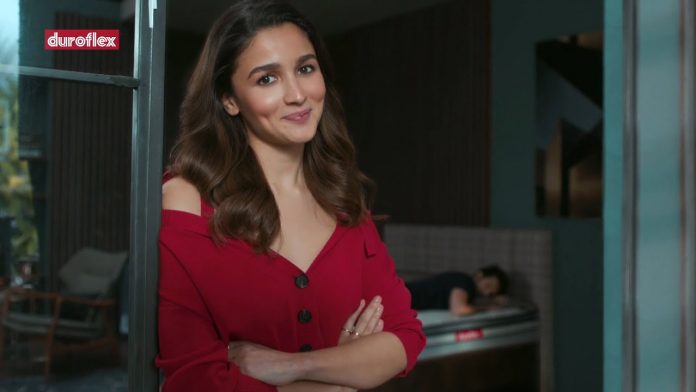 Nowadays, sleep is compromising because of a stress-filled environment. Duroflex, a sleep solution brand comes up to encourage Indian people to reconsider their choices, about sleep essentials like mattresses which enable individuals a stronger sleep.

Duroflex launches its new campaign, ‘Nothing Like Duroflex’ featuring National brand ambassador Alia Bhat to focus on the importance of investing in a night of healthy sleep.

The TVC featuring Alia showed she is visiting one of her friend’s houses observing that he’s dazing and sleep-deprived. She immediately went to watch his bedroom’s mattress. She asks him out on his inferior choice of mattress and made him chargeable for his tiredness.

Through this, the brand breaks the common myth that everyone’s mattress is the same, and while purchasing it one doesn’t have to consider much. Alia said to her friend the differentiation between the Duroflex research-backed mattress from others. Duroflex mattress comes with five zoned filled support bodies, ad prescribed by doctors too. The ad ends with her friend sleeping peacefully while Alia brings a message of Nothing Like Duroflex.

Mathew Chandy – Managing director of Duroflex, said, “The collaboration with Alia Bhatt is that the start of our new growth phase of reaching customers across generations. It strengthens our journey in being the rapidly growing brand in 2021 with a commitment to helping India sleep”.

Smita Murarka- Chief Marketing Officer of Duroflex, expresses her views on the new campaign, “Our campaign aims to aware the patron to require sleep seriously, be active and before buy be thoughtful on the mattress. The campaign by Duroflex communicates a home setting and shows the real-life conversation between the buddies. With Alia Bhatt, we aim to spread the message all over the country that there’s ‘Nothing Like Duroflex’ and everything besides is just a compromise. By bringing herself to the center of the film, Alia effortlessly leads a brisk campaign. Duroflex is an innovator brand and securely echoes well with Indian consumers.

The campaign film of Duroflex was directed by the notable director, Abhishek Verma. And the brand has launched its campaign nationally with a multi-channel strategy.