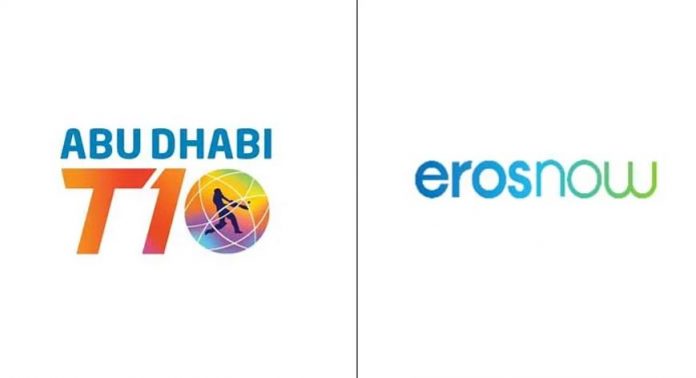 Eros Now, by Eros STX Global Corporation, announces it’s streaming and branding partnership with the Abu Dhabi T10 Tournament of this year, which is the fourth edition of the tournament and the second in Abu Dhabi. Eros Now, will also officially sponsor the Team Abu Dhabi in the tournament. Eros Now will broadcast the popular tournament in significant regions including, Australia, Sri Lanka, Bangladesh, Afghanistan, Nepal, Bhutan, Maldives, Malaysia, Hong Kong, Indonesia, USA, and Canada.
According to a recent report by Media Partners Asia, the online video market in India is expected to reach $4 billion by 2025, and sports viewership will be the key to this figure. There has been a major hike in Cricket viewership worldwide, through watching tournaments on streaming platforms and the fans are willing to pay for premium, quality content. The addition of the tournament live broadcast will be instrumental to Eros Now in increasing the platform usage and powering up the brand’s growth among the global sports audience.
Abu Dhabi T10 will start on January 28 and go on till February 6. As Team Abu Dhabi’s Title sponsor, Eros Now targets to create a new relationship with its users in the Middle East and 12 significant other international markets where the game is popular. The cricket tournament features some of the best international players which will also be a factor in bringing viewership.

Commenting on the deal, Ali Hussein, CEO, Eros Now said, “The content available on streaming platforms is evolving with the continuous change in audiences’ demand for preferred content. Live cricket streaming is another avenue for Eros Now to deliver the best of content to sports lovers in international markets. Thus, Abu Dhabi T10 is the perfect association for us to enter into the sports live streaming category and take a step further to drive growth momentum.”