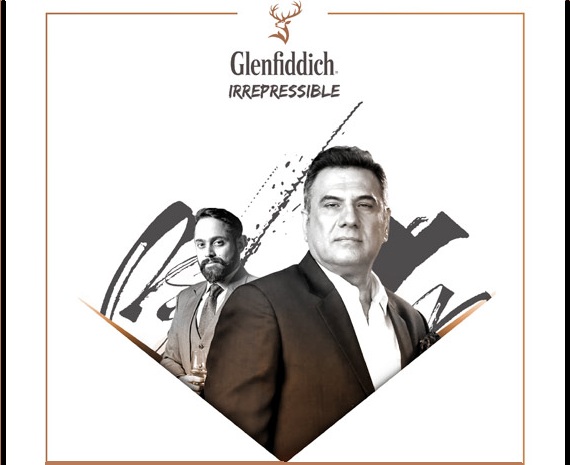 Glenfiddich, a single malt brand of Scotch whisky, has unveiled a new digital initiative named ‘Glenfiddich Irrepressible.’ The movement underlines the need to take chances for meaningful progress, not by tradition, but by creating their own rulebook through the abiding lives of celebrated citizens. The initiative is designed to narrate intriguing encounters written on routes explored by accepting the unexpected and taking risks.

It provides a brand new platform for users to exchange real life insights and struggles, addressing the ongoing desire to move forward. The campaign went live through the brand’s social media network, followed by engaging workshops on Glenfiddich brand Ambassador Angad Singh Gandhi’s Instagram account. The company has partnered with movie actor Boman Irani and chef Manish Mehrotra on the first step of the campaign.

The program was designed to portray exciting encounters written on routes explored by accepting the unexpected and taking risks. It provides an exclusive platform for individuals to exchange real-life insights and struggles, addressing the ongoing desire to move forward.

Angad Singh Gandhi, Glenfiddich India Brand Ambassador, said: “Glenfiddich Inexplicable is an attempt to honor individuals who look at the terror in their eyes and chase their dreams. They are considered to have conquered great odds of adding to the planet. We admire their risk-taking attitude, applaud their creative attitude, and glamorize their strength of character for what we believe in Glenfiddich the capacity to abandon the comfort zone and accept the unexpected for significant progress.

The World’s Most Recognized Single Malt Scotch Whisky releases its latest ‘Glenfiddich Irrepressible’ multimedia ad. In the depths of operating norms in the domain of whisky, the latest campaign reiterates the need to take chances for substantive development, to live not by tradition but by writing our own rule-book through the irrepressible lives of prestigious individuals, guided by a vibrant sense of mission and a determination to set their own pace.

People who are guided by their own mindset and pursue their own direction. Glenfiddich Irrepressible describes the impressions of mysterious routes found when wandering along risk-taking trails. The initiative provides a forum for certain participants to hold their real-life struggles and perspectives in going forward.