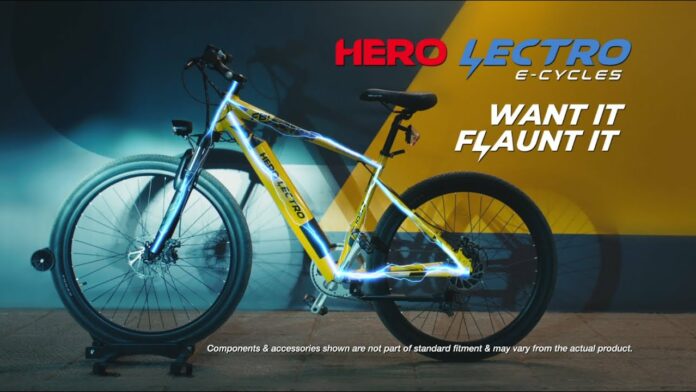 People have been looking for smarter ways to get around the city since the advent of motorized traffic. Ebikes, or electric bicycles, have been around for more than 20 years.

Riding an e-cycle is equivalent to riding a bike or scooter. The only exception comes is that there is no fuel expenses or carbon emissions, and you get to stay in shape. A recent campaign was launched by Hero Lectro, a leading e-cycles brand.

Hero Lectro is Hero Bicycles’ flagship E-Cycles brand available in India. Laqshya Media Group is behind the #WantItFlauntIt campaign, which is taking place in all major cities.

The campaign is being developed with the use of a powerful AI-powered OOH planning tool called ‘SHARP,’ which assists in locating the most relevant places in each city to reach out to the brand’s core TG, according to the agency.

Delhi, Mumbai, Ahmedabad, Jaipur, Indore, Pune, Chennai, Kolkata, Bhubaneshwar, and Cuttack are the main cities where the campaign is running. It includes a variety of large-format media units, cluster branding, and other unusual mediums.

In India, Hero Lectro has a broad e-cycle portfolio that covers several variations and caters to a variety of consumer needs. It provides solutions for commuting, leisure, and last-mile distribution while considering the various user behaviour. Detachable batteries, a USB connector, and an iSmart app are just a few of the clever features of the Hero Lectro.

According to Amarjeet Hudda, COO of Laqshya Solutions, e-bikes are the future of urban mobility, either for environmental reasons, for a healthier lifestyle, or just a more cost-effective means of transit.

According to Rachit Gupta, CMO, Hero Lectro, who commented on the campaign, e-cycles are the most sought-after vehicles in the world, even ahead of e-scooters and electric cars.

Electric bicycles resemble ordinary bicycles with pedals, but the rider can opt to be assisted by an electric motor powered by lithium-ion battery technology, similar to that used in electric vehicles. The fact that they utilise extremely little electric power compared to other vehicles like automobiles or motorcycles is one of the reasons for their growing appeal, particularly in European countries. Pedelecs, or pedal-assisted electric bicycles, have become an important aspect of urban mobility in the future.

Electric bicycles are not only environmentally green, but they are also cost-effective. They do not require vehicle registration, therefore the cost of ownership is inexpensive, and because they require little maintenance and run on energy and human labour, the cost of operation is likewise low. They don’t even require a driver’s licence.