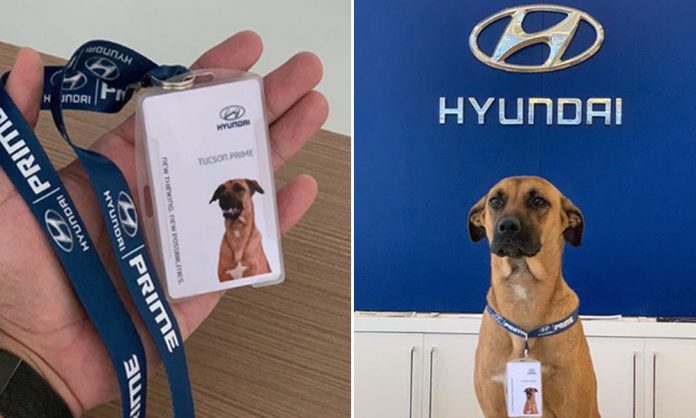 Walking into a Hyundai car showroom and being welcomed by their best employee of the year – a dog. That is what the role that Tucson Prime, a street dog was adopted by a Hyundai showroom, fulfills with composure. The touching story of Tucson Prime has won many of the hearts after going viral on social media platforms in recent times. The dog’s salvage and subsequent promotion to the salesman did not take place in India.

Tucson is a street dog, seen hanging out near a car showroom in Brazil. The adorable dog soon made friends with the staff of the showroom, who inducted Tucson into their Hyundai family and made Tucson an honorary employee – complete with his Identity card.

According to the World of Buzz, Tucson has just been promoted to a car salesman after being adopted by Hyundai in May 2020. Now, Tucson can be seen guarding the Hyundai showroom in Description Serra, Brazil.

Tucson’s beautiful story gained viral attention after it was shared on Instagram by Hyundai Brazil four days ago. The automotive manufacturer wrote while introducing their newest employee on Instagram, that the new member is about one year old, was welcomed by the Hyundai, and has by now won over co-workers and customers.

Actor Swastika Mukherjee was also the one among those who shared the story on social media.

Passionate In Marketing - September 13, 2020
0
Cricket has always been a vital part of India, and the Indian Premier League (IPL) is like an annual trip. Millions watch...