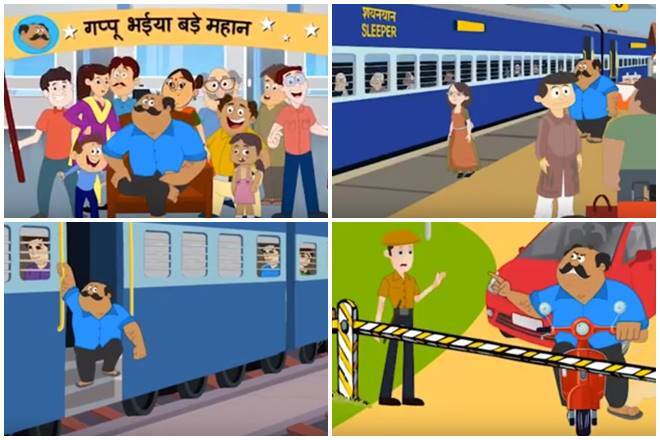 ‘Gappu Bhaiya’, the animated cartoon character which was launched by the Indian Railways last November 2019 on account of their campaign in connection with passenger safety is brought back again.

Gappu Bhaiya is now featured in in a  new short film released by the North Central Railway (NCR) to raise awareness around safe train travel in these  COVID times.

In the new two-minute-long film, Gappu Bhaiya is being depicted in his same old careless attitude, not following the required COVID safety guidelines. He is being set off for a train journey from Delhi back to his home in Assam and is neither practicing social distancing nor wearing a face mask.  It is also seen that he is also not using a hand sanitizer after coming in such close contact with publically used surfaces.

As the film is set in motion, the further clips Gappu Bhaiya is seen spitting around on the railway station platform. Although his phone is full of many applications, he does not have the Aarogya Setu app, which is required to be download by every individual of the country as per the government protocol, especially while traveling to distances.

Gappu Bhaiya, The self-proclaimed ‘aware’ is then being shown falling sick when he reaches home and is then tested positive for COVID-19. He eventually dies because of this infection. As the film ends, it advises us to not be like Gappu ‘Mahan’.

The film highlights the importance of taking proper precautions such as always wear a face mask, use hand sanitizer, and maintain social distancing, and following necessary practices to safeguard our life from the virus attack.

The film which was released in 2019 listed the various threats to passengers’ safety while traveling, including food offered from strangers, carrying inflammable items while traveling in a train, hanging on the doors of a moving train, walking on railway tracks, touching unattended items on railway stations as well as regarding boarding, and exiting on moving trains, and others.

The new film was launched by the Ministry of Railways on its official Twitter handle last week. As a part of educating the public, it is believed that such innovative short films would bring a change and effect in society.