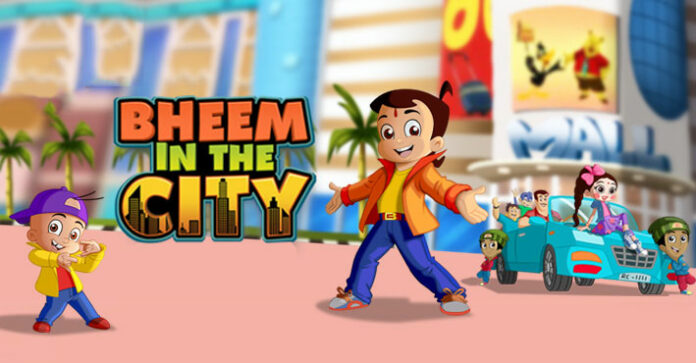 With the premiere of a brand-new series, ‘Bheem In The City,’ and famous Chhota Bheem movies in Hindi, Tamil, and Telugu, kids and families will be able to experience their favorite Indian cartoon character, Chhota Bheem.

The new series, which features an up-tempo title tune by famous rapper Raftaar, will follow Bheem and his buddies Chutki, Raju, Jaggu, Kaalia, Dholu, and Bholu as they continue their adventures in the ultra-modern metropolis of Raunak Sheher following their amazing accomplishments in Dholakpur.

The children explore every nook and cranny of the city, discovering moments of fun, joy, and unity while keeping Raunak Sheher safe from the threat of new villains, accompanied by Abhimanyu, Bheem’s adoring father.

‘Bheem In The City,’ according to rapper Raftaar, is a fresh take on the household character, and the title track is required to convey the originality and excitement. He also stated that he added his distinctive rhyme to the wacky lyrics to produce one of the most “hatke” theme songs for the program, and that he had a lot of fun composing it, and that he hopes to see kids rapping to it.

Republic Day week celebrations on POGO will include increased promotions through substantial digital marketing, influencer engagement, brand integrations, and on-air activations to amp up the week of excitement and adventure with Chhota Bheem.

POGO has teamed up with BIG FM for an on-air radio contest in which listeners may win fantastic gift hampers by answering easy questions.

Abhishek Dutta, South Asia Network Head for Cartoon Network and POGO, said that they were kicking off the new year with a bang with an action-packed, exciting, and engaging content line-up for their young audience during the Republic Day celebrations.

POGO was ready to regale them with their original animation content as part of the Republic Day preparations, he added, through favorite characters Chhota Bheem, Chutki, and Raju, as well as an incredible title track debut for the new series ‘Bheem In The City and a slew of exciting activities.

Author - May 21, 2022
0
To renew its brand identity in India, Spawake, a strategic brand of KOSÉ Corporation, a Japanese beauty and cosmetics company, has selected...