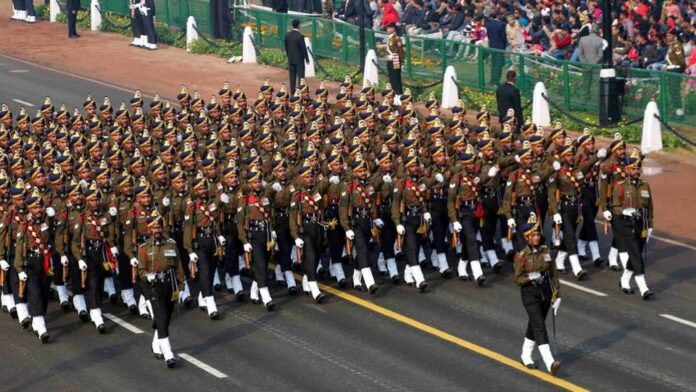 According to the latest reports regarding the upcoming republic day of the year, for the first time in 75 years, the republic day parade will be delayed by 30 minutes of commencement from their usual time of starting.

The usual time of starting the parade was at 10 am, all these years. But due to the situation as our nation is witnessing a spike in the number of cases of the third wave of covid, the officials have decided to make a delayed start of the parade.

According to the reports, a senior police officer made the official announcement that the parade will commence this year at 10.30 am. He also added that the delay is caused by the prevailing Covid-19 protocols in our state.

The parade will be 90 minutes long like all the years and Prime Minister Narendra Modi will be addressing the ceremony and will be visiting the National War Memorial near the India gate and also before the parade begins the homages who lost their lives in Jammu and Kashmir will be paid for their security.

During the whole ceremony and before there will be strict orders to follow the Covid-19 protocols and the police officer also mentioned that the artists who perform on the day will not be allowed to see anyone.

For the first time, the invitations are mainly given to the unprivileged people who haven’t seen the parade yet in their lives according to the republic reporter to the media. He also added that there will be no foreign chief guest from any Asian countries considering the situation.

The invitation has already been sent to five Asian countries, but it has been canceled due to the situation.

The whole ceremony will have a multi-layer security cover, facial recognition systems and 300 CCTVs have been installed on the whole premise as part of the security measures as well as considering the condition of the state.

All the people who appear at the ceremony must be fully vaccinated as well as follow the Covid-19 Protocols such as wearing a mask, frequently sanitizing, and maintaining social distancing.

Due to the Covid-19 situation, 4000 tickets are available for the ceremony, and a total of 24,000 people will be allowed to attend the function. The function will begin on January 23, 2020, with regard to the death anniversary of  Subash Chandra bose which falls on January 24, 2020.