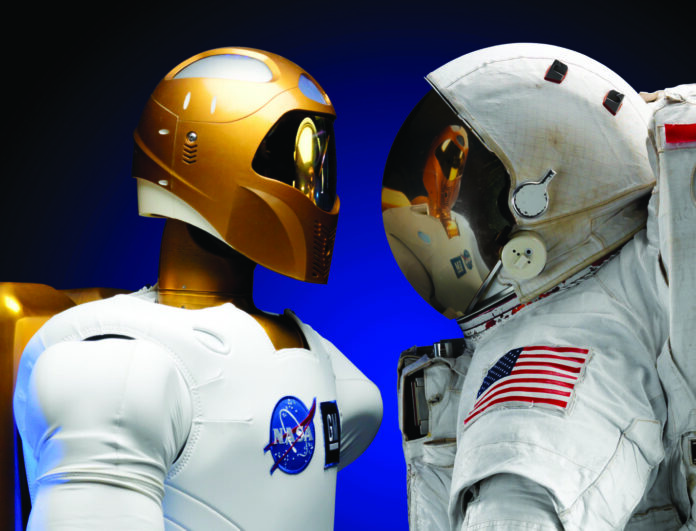 NASA Johnson Space Centre developed robotic systems to assist the astronauts in Space. Robonaut, a humanoid robot was developed with the look of a suited astronaut, had two dextrous arms and hands, and articulating waist and a two-degree-of-freedom neck, camera, and sensors. Robonaut performs a variety of tasks including assisting crew members in routine maintenance, setting the worksites, and also in rapid response capacity. Robonaut can establish remote control over its subsystems enables the human operator to maintain situational awareness.

Components included in the Robonaut include Helmet Mounted Displays, Posture trackers, and feedback gloves. It also involves in telepresence, where the goal is to provide an accurate, low-cost method for tracking motions and in communication with the operator. Telepresence uses Virtual Reality (VR) display technologies to help the operator. HMD or Helmet Mounted Displays help in understanding the robot’s environment and facilitate operation and interaction in the worksite. There is visual feedback available from the robot with the help of a stereo display helmet from the four cameras in the head. In order to make the robot project effective, there is a field-of-view, speech recognition capabilities and graphical overlay capabilities in it.

It will cost around US$430 million a year to keep an astronaut in the earth’s orbit according to a three-year-old start-up called Gitai Inc. To avoid this extra cost on space explorations, a remotely controlled robot is the best option. By using robots, extra money and resources can be avoided and also reduce the risk in exploration.

There was a Bloomberg report that NASA is opening up an International Space Station for private businesses and in dealing with the Artemis mission to send astronauts back to the moon. There’s also a growing need to keep spending under control as the space explorations are becoming complex and expensive. Most modern technologies help the users to use the robots remotely, for example with the help of a drone. With a drone, an operator can control an entire robot with the help of virtual reality headsets and screens. The use of Artificial Intelligence and robots are increasing in space exploration and that’s the reason why the space robotics market is projected to reach US$4.4 billion by 2023.

Sho Nakanose, CEO of Tokyo and San Francisco based Gitai is developing a robot that can work in space and can be operated from Earth. He also adds that ‘there will be an era in which humans will work in space, not just going to space’.